I have a long history with this film as I seem to remember it being shown on daytime TV here in the UK in the early 80’s. The thinking probably went along the lines of ‘We have such extreme horror movies now and so it will be safe to show this old 1950’s horror film which couldn’t possibly be seen as being scary anymore!’ I then saw the film as part of a double-bill of Hammer Horror films that were shown every Thursday night on Tyne Tees Television. I got to see most of Hammer’s films during this period as every week there was a new double-bill of two more of the studio’s back catalogue. 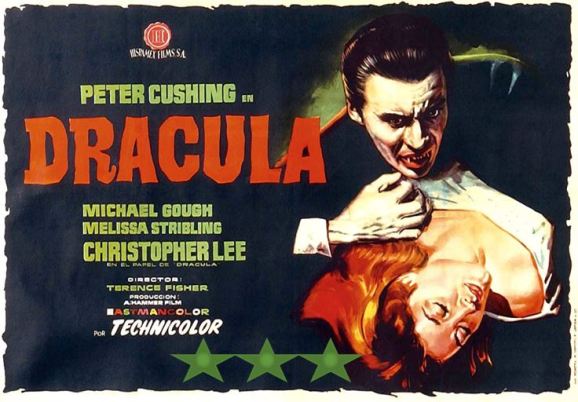 This film, to me, is the definitive Dracula. Freddie Francis’ sweeping direction is perfect when paired with the opulent and beautiful set designs that are just as sweeping. The iconography and more gruesome elements of the narrative that made the Dracula myth more explicit, shocking and graphic were also placed centre stage on the screen for the first time- the fangs, the blood (which I would have thought was imperative to the legend but was often excluded at that point in time for obvious reasons) that appears to be redder than red (and because of this reminds me of Dawn of the Dead), the searing burn marks left by a crucifix being used against a vampire, the ending that leaves nothing to the imagination.

The pace at which the film gallops along at leaves the audience with a feeling of there being no filler padding out the film. Every scene feels essential. The film has no flab whatsoever.

But it’s the casting that is the most innovative and interesting thing about this film. Cushing as Van Helsing is amazing but it’s (unsurprisingly) Christopher Lee as Dracula who impresses. He imbues the role with the authority and menace required but also with something that up until that point hadn’t been fully explored on screen before- sexuality. Dracula has always been a sexy character and Lee’s performance fully exploits and utilises this. There is a seduction and intimacy regarding the ritual he employs to bite his victim’s neck. His vampire gains access to his victims because of his brooding good looks and his aura of the exotic and unknown. He oozes sex appeal just as later the blood of his victims will ooze out of their veins. In fact, there is an impression of his female victims preparing for his visit with baited breath as they lie panting and ready on their beds for him to enter their quarters with a swoosh of his cape. He arrives out of nowhere and in secretive fashion a bit like a much more sinister but no less sexual and stylish version of the Milk Tray man.

Add to this the fact that the film just flows effortlessly and an ending that is still one of the finest climaxes to a horror film ever. It contains special effects that have aged very well indeed and are still a thing of beauty.

When all of these components are added together you have the perfect rendering of the Dracula legend and possibly Hammer’s greatest film. 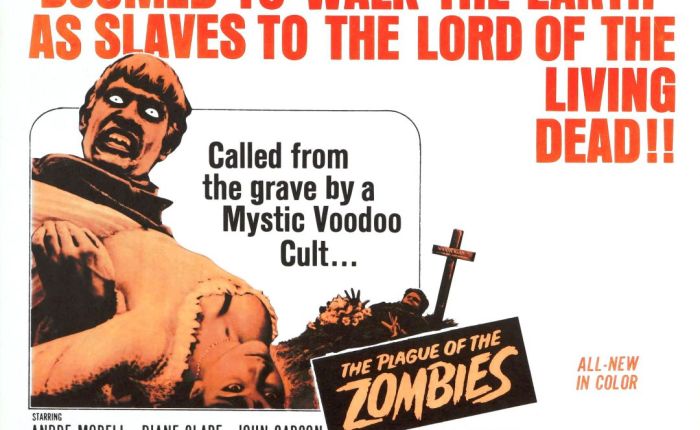 This has one of the most crazy plots of any Hammer film I’ve ever seen. I won’t give away everything that happens though.

A Cornish village is suffering from some sort of plague that is bumping people off at such a rate that the local doctor asks an expert friend to investigate what is happening. When opening up the graves of the recently deceased they discover that all of the coffins are empty. Could the answer to this mystery be connected with the tin mine which is on the land of Squire Clive Hamilton? Is it also relevant that he used to live in Haiti and the fact that he practiced voodoo and the black arts whilst he was there?

I remember seeing this in the 80s as my local television station used to show a double-bill of Hammer films every Thursday night (a blessing!) It was scary then and it’s retained it’s ability to shock. The zombies themselves are the stuff of nightmares.

But unfortunately the film drags every now and again. But on the whole it’s worth seeing, even if it’s not the best of the studio’s output. 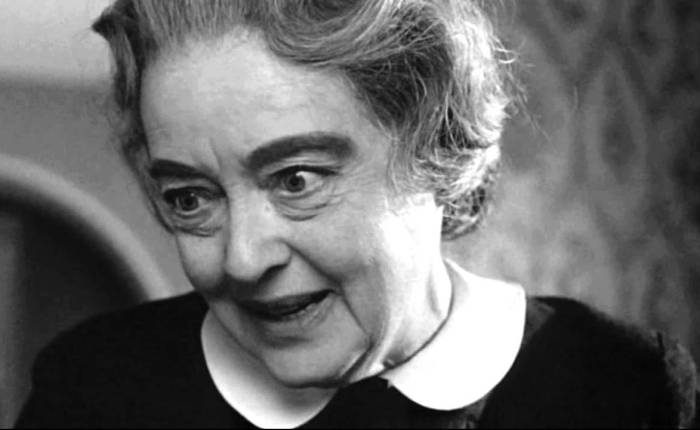 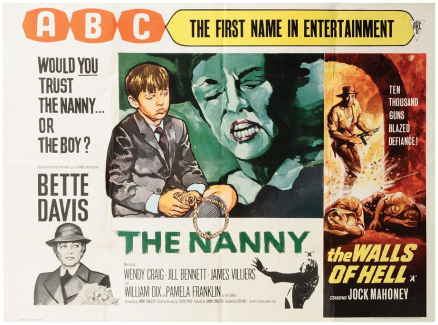 What a cracking film to start my 31 Days of Halloween with.

This is a British film which stars Bette Davis as a nanny for a family living in London in which a young boy has been sent away for supposedly killing his sister. The boy is due to be released after two years and return to his family home and under Ms Davis’ supervision.

The boy vehemently protests his innocence and insists that instead it was the nanny who committed the terrible deed. Is he right? Or is the nanny indeed guilty? 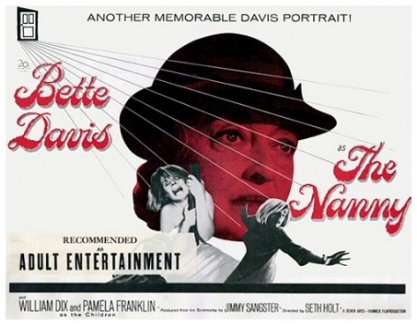 Theres already the almost unspeakable taboo of a child killing another child within this film which gives the film a grittiness right from the get go. The household in question is steeped in gothic tension even though it is in fact light and airy. No Baby Jane mansion here.

Theres also the stifling formality of English life at this time. There are so many manners and formalities at play that are overwhelmingly suffocating and claustrophobic.

Within the film there is also a delicious generation gap which underlines this and presents a tangible ‘Old vs new’ scenario. The boy in question, Joey forges a friendship with a 14 year old girl who lives in the same building. She dresses like a hip 60s girl, all white lipstick and black eyeliner. When we see within her bedroom Joey gazes up at a Beatles mobile she has hanging from the ceiling and at one point we see her reclining on her bed reading a copy of the girls magazine Jackie which has a pin up of Brian Jones of The Rolling Stones on its back cover. 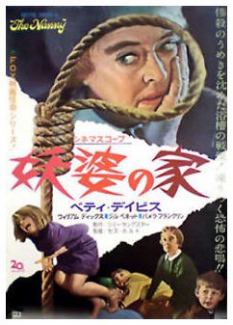 Beautifully acted (especially Ms Davis of course, whose character has a pair of the ugliest eyebrows ever captured on film) and elegantly directed, this is one of Hammer’s finest films.

Of course this would only have been made with Ms Davis if Hollywood wasn’t casting the very best stars of yesteryear anymore. Every cloud has a silver lining. What was Hollywood’s loss was very much Hammer’s gain.