This Steven Spielberg directed movie made for TV and adapted from Richard Matheson’s short story still packs a punch.

David Mann is a travelling businessman venturing to an appointment across California but is slowed down considerably by an ominous truck that at first inconveniences him until things suddenly take a much darker tone. 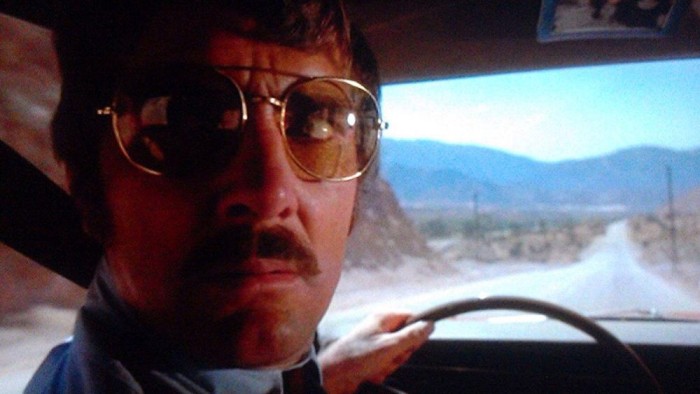 This film could be seen to represent masculinity. David could be seen to represent the modern man- hen-pecked, pussy-whipped and a million miles from his caveman Id origins. Notice David meekly calling his wife to try and patch things up as he had earlier had an argument with her. They had been at a party when another man started coming onto her and acting inappropriately. He voices the opinion that she was sore because he didn’t choose to square up to the suitor and knock his lights out. He voices the opinion that she thinks he hadn’t fulfilled his traditionally masculine role.

Also, when David goes to the garage he asks the attendant to ‘Fill her up’ with the attendant replying ‘You’re the boss.’ To which David responds ‘Not in my house I’m not!’

David’s continued oneupmanship with the truck represents a display of masculine superiority. Whos the bigger man, who has the bigger penis? 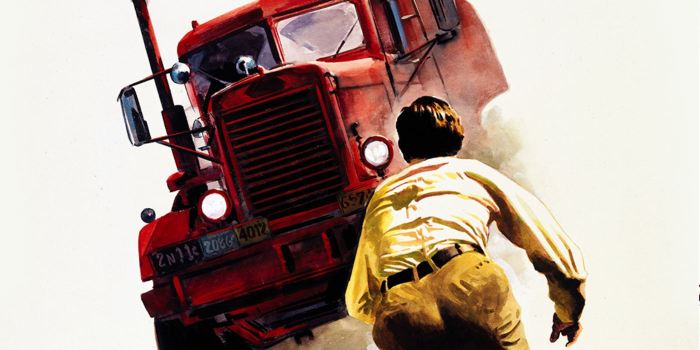 The clues to the driver of the truck point towards a more rugged, masculine opponent who is blue collar, possibly from Down South (he wears jeans and cowboy boots for his line of work as opposed to David’s white collar suit and polished shoes).

The truck is the Return of the Repressed in the guise of David’s more base level, undomesticated masculinity. It’s always present, it’s unescapable and is waiting to confront him when he thinks he’s shaken it off.

Witness the scene in which David stops to use the payphone at the garage owned by the woman who keeps exhibits of rattlesnakes, tarantulas and lizards. Whilst the truck smashes the cages of these creatures and inadvertently sets them free whilst trying to run David over, it frees these creatures from their cages and places them where they would have been before- in the wild. This is also symbolic. The truck’s very deeds are also freeing David’s more primal masculine survival instincts which it thinks should be just as free but have become more deeply embedded and seemingly eradicated due to 70’s society with it’s emphasis on Women’s Liberation and, thus, the emasculation of men. The fact that the owner of the caged animals exhibit is female is also telling.

But, whilst the truck might possess and exhibit brute force and traditional ‘Alpha Male’ qualities, it’s David’s qualities of cunning and intellect that save him. He utilises attributes that are above the level of the truck’s Id and he uses them advantageously.

Notice also the dinosaur roar the truck makes as it faces it’s demise. This could be seen as symbolic of this outdated, destructive and potentially dangerous version of untamed and unrefined masculinity. This dinosaur roar was also referenced in Spielberg’s later masterpiece, Jaws. He even made the roar louder when it was released in a new print on Blu ray a few years ago.

This really is a stunning piece of work. Acted to perfection, beautifully framed and paced amazingly. This may have been made for American TV but it proved so successful that it was expanded and released theatrically in the UK the year after.

A special mention to the gorgeous cinematography. The American landscape has never looked so beautiful along with the quintessentially American institutions such as it’s diners and random sideshow attractions such as the garage owner’s snakes and spiders sideshow. A gorgeous love -letter to Americana and a few examples of what makes this country so amazing.

Spielberg went on to make another horror themed TV movie, Something Evil the following year. This is also a resounding success but unfortunately never released on home media.

I knew this would be a great film when I saw it was written by Brian Clemens who wrote, amongst other things, the amazing series called Thriller. I wasn’t wrong. This is a cracking movie.

Mia Farrow plays Sarah, a girl who is returning home after being in hospital after a fall from a horse has made her go blind.

She is greeted by her mother and father. She goes for a nap and doesn’t realise that when she wakes up her entire family have been murdered. There is a VERY unsettling sequence in which she doesn’t realise this and goes about her business with the dead bodies of her nearest and dearest around her. When she enters the kitchen we are shocked to discover that as she makes a cup of coffee the killer is actually sat at the kitchen table watching her every move while she is completely oblivious.

She soon discovers everyone is dead. And thats when things start to become really tense.

The killer is kept secret from the audience but it identifiable only because of a distinctive pair of boots he wears, each with a star on them. The killer’s walk from the cinema at the very start of the film is an incredible sequence. 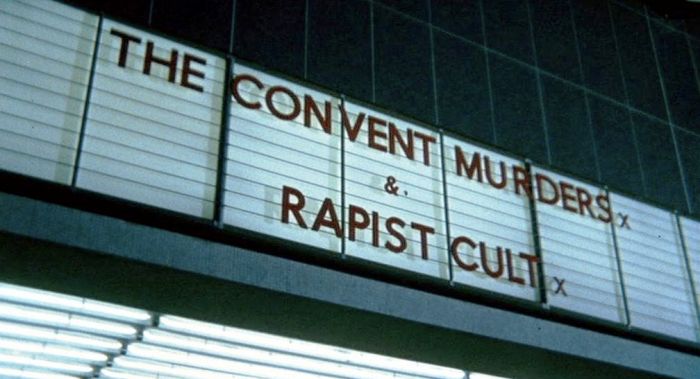 Theres stars from stage and screen in this film. Norman Eshley (Tristran’s dad from George and Mildred), Michael ‘Boon’ Elphick, Paul ‘Just Good Friends’ Nicholas and Lila Kaye, the landlady from The Slaughtered Lamb in An American Werewolf in London all appear.

Mia Farrow is totally believable in the lead role and coupled with some excellent direction and we have some truly tense, edge of the seat moments. Check out the scene where she moves around and through the arches in the huge house she lives in so that the killer won’t see her. Outstanding acting and camerawork.

I watched Indicator’s Blu ray for this review and it is exceptional. Theres even another cut of the film that went by the title ‘Blind Terror’ on the disc. Indicator are fast becoming a Blu ray label to rival the very best Blu ray companies out there.

Vincent Price’s Dr Phibes avenges the death of his wife by bumping off the culprits with each murder having a biblical connection.

Very camp, very funny and very unsettling- this is one of Price’s best just like Witchfinder General and the Poe films he also made with Roger Corman.

Check out Phibes’ clockwork band- one of the eeriest things committed to celluloid.

Also check out the classic art deco decors and groovier surroundings that capture the early 70s so fantastically.

Caroline Munro appears but only as photos of Phibes’ tragic dead wife.