A film set in London Underground. A cannibal is the last of a generation of cannibals who live in the tunnels of Russell Square tube station. He hunts for food ie passengers as the late night trains are running.

This film is obviously based on the supposedly true story of Sawney Beane and his family- a cannibal who lived in a cave in 19th century Glasgow. 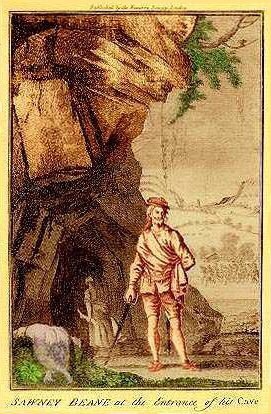 The setting of the underground of London is also very evocative. I know all too well how scary a deserted underground station can be when waiting for the last tube home. Thank God for the 24 hour tube.

Donald Pleasence stars as a hard bitten police detective. But hes too lovable to be truly nasty. Hes like a more affable version of Jack Regan from The Sweeney.

The character of the cannibal actually evokes a great deal of sympathy from the audience. Yes he hunts people for food but you get the feeling hes just trying to survive like everyone else in the Big Smoke. He can’t speak except for the words ‘Mind The Doors.’ Oh, bless.

This is a quirky 70s British horror gem that captures a time in London history which makes it an amazing time capsule. Its story needed fleshing out a bit more though (pun not intended).