The other half of a double-bill in UK cinemas with the other film being the far better The Incredible Melting Man. This was actually made for television in America. 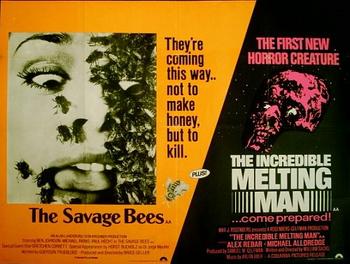 Killer bees have flown into America and are claiming their first casualties disturbingly close to New Orleans when their Mardi Gras is due to kick off. A bee expert (of course) and a guy who isn’t quite a coroner yet (so he isn’t taken seriously) are on the case but come up against obstacles in the form of sniffy officials who don’t want to see Mardi Gras cancelled- at any cost (hints of Murray Hamilton’s character in Jaws here).

We learn that the bees don’t like noise and the colours black and red. The first human victim is a coloured girl in a red dress blowing a toy horn. Not her lucky day.

The finale involves Ms Bee Expert being nudged into a sports stadium in her red Beetle which the bees have covered as she was earlier using the horn near them (doh!). The temperature of the Super Dome is then lowered as the bees die when temperatures reach below 35 Degrees Fahrenheit. This sequence is very unexpected and works well with tension being ramped up as the temperatures come down (we see this on huge displays which show the actual countdown). 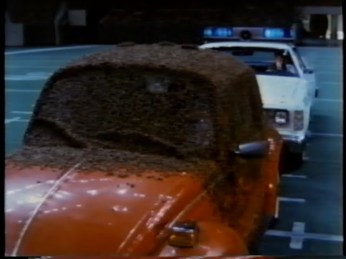 This is an above average TV movie which received a video release in some territories. There aren’t enough action sequences and some of the more talky bits are quite pedestrian. But when it gets going its quite exciting. Because I saw it on TV when I was a small child and loved it then it will always hold a special place in my little black heart.

Look out for the scene in which someone in fancy dress tries to take on the bees with a sword. Yes, a sword!

I first learnt of this film when I saw the poster for a double bill it was playing as a part of outside my local cinema back in the day. 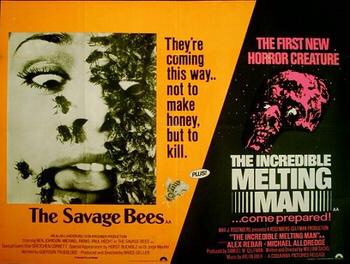 I then saw it as a kid when it was on television. It was the last thing I watched before going to bed and it scared the crap out of me.
Was it still scary when I watched it more than thirty years later? Well, no but its still a decent enough movie.
My favourite scene- the guy who tries to fend off the killer bees by using a sword. Of all things. 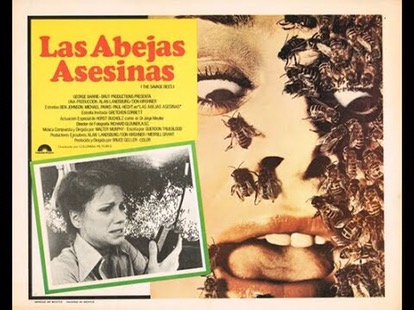