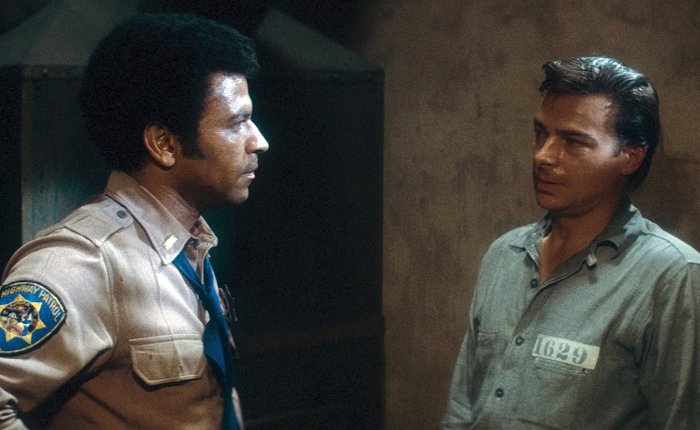 It’s 1990. I’m tuning into the excellent Moviedrome series of films on BBC2 with each cult film in the series being introduced by director Alex Cox.

The film being shown that night was John Carpenter’s second feature film Assault on Precinct 13, his reworking of Howard Hawks’ Rio Bravo and my mind was blown. I had been a fan of Halloween since I had seen it a few years before this and desperately wanted to see Assault but tracking it down was very hard indeed due to the video release being out of print. That made this screening even more essential. I recorded the film and watched it over and over and over again.

The film concerns a police station in the crime-ridden suburb of Anderson, California closing down with a cop named Bishop being assigned to oversee this for his night shift. He arrives to see that there are still a few staff working in the police station. Unfortunately, the local gang named Street Thunder have decided to announce a ‘cholo’ (meaning ‘to the death’) against the police as the pigs had killed six members of their tribe. That night they will seek their revenge because of this.

Add to this a bus transporting Death Row criminals that has to make a stop at the police station and a distraught father who is catatonic with grief who also arrives at the near derelict locale. Add together all of these ingredients, blend together and voila! You have a kick ass movie.

What is it about the film that makes it so good? There are many reasons.

Firstly, the look and feel of the film are amazing. Carpenter’s use of Panavision gives the film a panoramic (duh) scope that is not only inspired but also epic.

This aspect ratio also makes the film very sinister in places with the Panavision making the dark, shadowy corners of the police station and it’s environs even more creepy. In fact, there are a number of parallels between Assault and Night of the Living Dead with the black leads of both films, the character who you think is going to be a major player in the film’s narrative being completely sidelined because of their catatonic state (Lawson is the father who reminds me of Barbara who very quickly retreats into herself shortly after she reaches the farmhouse in Night) and the zombie-esque qualities of the Street Thunder gang members who are just as omnipotent, numerous and expendable as Romero’s undead.

Another great quality that Assault possesses is that whilst it contains a great deal of humour this never overbalances the horror and suspense. Whether it’s Napoleon Wilson and Wells playing ‘potatoes’ to decide who goes out to hot-wire a car or the plathora of funny one-liners uttered by one of the film’s characters (‘I have a new plan. It’s called ‘Save Ass’), these moments never make Assault descend into a horrible sludge of geek humour or derivative dialogue (yes, I’m thinking of you Quentin Tarantino). The screenplay for Assault crackles with electricity.

Assault also contains one of the most shocking scenes I’ve ever seen in a film, something that is still talked about by many film critics, journalists and fans. I’m not giving it away but it remains taboo even today.

The characters are another reason why I love the film so much. Napoleon Wilson is yet another legendary Carpenter creation that includes Snake Plissken, Michael Myers and Jack Burton. How did he get his name? (I think the arm breaking scene is a good step in the right direction when pondering this point regarding his backstory). In fact, we want to know everything about his life that led to the night captured within Assault’s narrative.

And yet every character is just as enigmatic and brilliantly realised whether it be Bishop who just wants a quiet night shift or Leigh who is working at the police station still. I love the scene in which Bishop whispers to Leigh what he had carved into a desk as a child that had prompted his father to drag him to that very same police station years before to be ticked off by a cop there. The audience never finds out what it was. I love mystery in film, something that modern filmmakers know nothing about but should. Overexplanation hinders so many films especially the vile horror prequels that get churned out nowadays.

In fact, the character of Leigh is a fantastic updating of the Hawksian woman- tough, resourceful and icily sexual. Witness the scene in which Napoleon finally finds someone with a cigarette. Leigh gives it to him and even lights it. This scene in itself is one of my favourite moments in film history. In fact, there are many scenes with Assault which are lay claim to that mantle. Another example is the gang attack on the police station which quickly turns into a beautiful ballet of bullets. It’s impeccable.

Add to this one of Carpenter’s best music scores (which is really saying something. His music for Assault is minimalist, gritty and utter analogue synth perfection) and you have a bona fide masterpiece. I was honoured enough to see the film at a midnight screening here in Leeds a few years ago and it was great to see one of my favourite films on the big screen.

A film I love from start to finish. All killer, no filler.