I knew very little about Bloody New Year prior to watching it for this review. I thought it might be another slasher movie themed around yet another public holiday just like New Year’s Evil.

How wrong I was! Every now and again I watch a film that is so ‘out there’ that I think to myself ‘What the hell was that?!’ Bloody New Year is one such film.

We see New Year celebrations at a small coastal hotel with the guests forming a conga and leaving the function room with only one woman remaining. The action then shoots forward to the 80’s whereby some young adults are at a funfair and see an American girl being harassed on the waltzers by some locals/carnies. They decide to rescue her but piss off the carnies in the process who chase after them. They all get into a boat and sail away to a small local island to escape them. They run aground and have to swim/wade to shore. Once there they see a small hotel in the distance and decide to go there to dry off and freshen up. Things turn increasingly weird when they get there.

This film is actually British made and feels like one of the Look and Read dramas that were made for schools in the UK in the 80’s. In fact I seem to remember seeing one which was called Fairground! (loving the exclamation mark!) in 1983. Its almost like this film was written for (and possibly by) a bunch of 8 years olds. That’s not to put the film down but just to point out that the whole film holds a remarkably non-jaded and innocent air to events that unfurl within the movie.

Bloody New Year is cheaply made, the special effects are sub-par, the events that happen within the hotel feel like a string of cliches. In fact, the film feels like a bunch of kids were given some video nasties to watch and then the film’s writers asked them what they had seen and noted their exaggerated recollections down and used them as the plot of this movie.

Whilst all of these points feel like criticisms, amazingly THEY’RE NOT! I watched it, was left with the feeling of ‘What the…?!’ when it finished but also realised that I had loved it! And that is one of the things about cult cinema- the film you hold dear might be completely inept and a poorly executed movie resplendent with shoddy production values. But it might have an air or an atmosphere to it that is specific to that film and that film alone. And Bloody New Year has this in spades.

I love the fact that it is British made, with the male characters looking like contestants from a 1987 episode of Blind Date. They’re all mullets and C&A/Burton’s clothing. The fashions exhibited by the female characters is no better. It’s such a shame when they decide to change out of their clothes into the 1950’s togs they find at the hotel.

The chain of events that happen in the seemingly possessed hotel feel like a million miles away from The Shining. In fact, instead of merely regurgitating the events from Kubrick’s film albeit with a fraction of the budget (although there are unavoidable similarities regarding past events being held in both locales), the film seemingly goes down the route of using The Evil Dead as a primary influence. This is interesting as the filmmakers must have seen the film, admired it’s low budget ethos (they knew that this was the route to go down for their film with it’s apparent lack of a sizeable budget) and how it worked admirably for Sam Raimi (and also how the film was absolutely huge and not just in the UK because of the video nasty furore and the film being banned but also worldwide) . Thus within Bloody New Year we get bodily dismemberment, characters turning into zombies/demons and even a male character who returns to the hotel only to then turn into a zombie/demon. There even a scene that takes place in the woods near the hotel in which they seemingly come to life and sounds of people’s laughter (in reality possibly a sitcom laugh track obtained by the filmmakers) being heard by the characters trying to escape this particular madness. There is even a POV shot with the camera rushing at the characters through the woods like Raimi used to great effect in his film.

Then there is the make-up used for the effects in the film that looks like it was done by a GCSE art group. A trick within low budget filmmaking is not to focus on the make up or effects for too long especially if they were done on the cheap. This film bravely chooses to go the opposite route and focus on them in lingering shots. Potentially not a wise move but another quality of the film that makes it so endearing.

I’m loving the fact that one of the deaths was seemingly inspired by The Exorcist with a character’s neck (one of the carnies from the beginning of the film who hated the group so much that they actually went to the trouble of finding another boat and sailing to the island after the youngsters to wreak revenge) being twisted around not just once but multiple times for added horror effect.

Also within this mess is the fact that within the hotel seemingly inanimate objects have the power to come alive and attack the group (a fishing net and carved head on a bannister being but two), the character of a ghost chambermaid who reappears and then disappears numerous times during the film’s running time and a sequence involving all of the monsters/demons/zombies coming together to ask the two human characters to just give in and ‘join us’ (again, The Evil Dead influence resounds loudly!).

Look out for the scene near the end where the house seemingly gets bored of the couple of characters who are still human and just chucks them out of one of it’s windows. Hilarious.

Blend all of these ingredients together and you have a cheap horror movie made for the straight to video market in the UK where the whole ‘video nasty’ moral panic was going through a second wave (possibly because Sam Raimi had just released The Evil Dead 2, ironically). Bloody New Year should have been bogged down by it’s seemingly negative aspects and forgotten about. 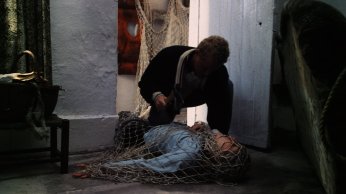 But that’s the thing. Even though it should be rubbish, it’s not! One major plus is that it’s never boring. My interest never flagged during the runtime and I was gripped until the end. The film has so much wide-eyed innocence to it and that fact that it feels like an especially bloody ‘made for schools’ special or episode of Dramarama that it works. It also has heart. This is cult cinema at it’s purest and before you ask I would never call this ‘so bad, it’s good’ (I would never call any film that redundant term). It has qualities that any number of big budget horror films will never have. I’d see this again in a heartbeat. I think this is infinitely better than It and the recent Halloween reimagining put together.

And the strange thing is that others agree with me. I thought I was going mad at how much I enjoyed this film and so I did something that I rarely do- I search online for other reviews. Sure there were the idiots who said that this was trash. But there were others who loved the film also despite it’s flaws or limitations. I’m not mad after all! There’s even a Cinema Snob episode devoted to it.

I look forward to buying the Blu Ray release of this from the States on Vinegar Syndrome. Fortunately this film is also on YouTube here.