A team of Louisiana Army National Guards venture into a local bayou. After getting lost they take three small boats belonging to local Cajuns. When they fire blank bullets at the men the Cajuns return this gesture with real bullets, killing one of the soldiers. From here on in things get worse and worse for the soldiers as they must fight for their own survival.

I remember seeing the last act of this film on late night TV in the 80’s and it was one of the most paranoid and chilling sequences I think I had ever seen in a film. Seeing the full film, this sequence remains taut and utterly unnerving.

In fact the film as a whole is yet another gem from director Walter Hill (The Warriors, 48 Hours, The Driver) with amazing cinematography from Andrew Laszlo.

This film reminds me of The Texas Chain Saw Massacre in that we have a slow tension-filled buildup until a massively violent incident comes out of the blue and shows us that the film means business. I’m certainly not going to disclose this genuinely shocking moment but it’s a gritty, uncompromising incident in a gritty and uncompromising film. 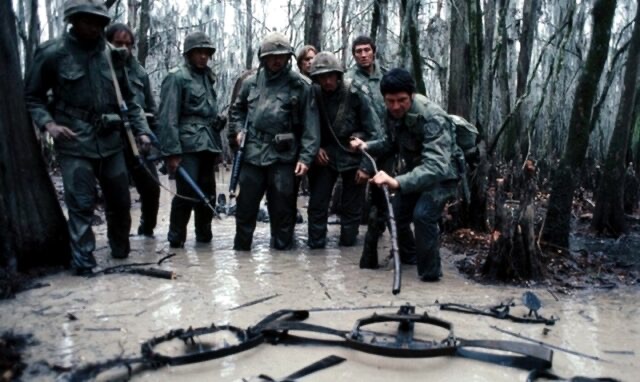 A fine all-male ensemble reminds me of the same dynamic as John Carpenter’s The Thing which can’t be bad. In fact, it reminded me of The Warriors also, but minus another Mercy type character. Again, this comparison is no bad thing.

On it’s release the movie drew inevitable comparisons to Deliverance but this feels rawer, leaner and more suspenseful. This has the sensibilities of an edgier independent film. And there are no cringy scenes involving banjos.