The pre-credits sequence for Humongous involves a woman being raped but then rescued by her German Shepherd dogs.

The film then moves forward to a bunch of kids going sailing and becoming stranded on an island supposedly populated by the woman featured earlier and her dogs. 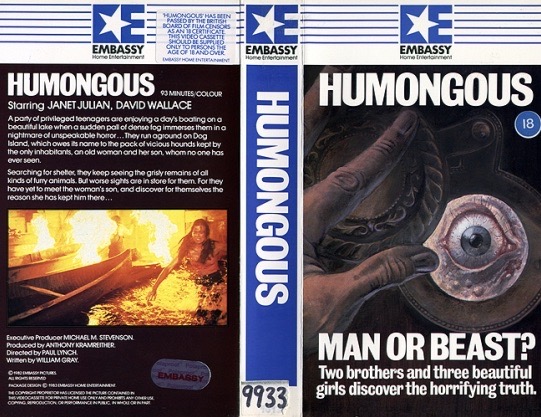 This film is a massive borefest. Unlikeable teens, a non-existent plot, a complete absence of tension and a picture that is wayyy too dark (although I’m wondering if this is just the print used for the DVD. Also, the sound was really bad. Maybe that was also the result of a bad print. If not, why film a movie that’s too dark and sounds like the sound recordist is having an acid trip? If it is just the print, I’d actually sit through a Blu ray restoration if a decent print was found and both sound and vision were cleaned up. I’m curious to see a version of the film where you can see and hear what’s actually happening).

There’s even a sequence that is a complete rip-off of part of Friday the 13th Part 2 (a much better film).

But the real shocker here is that this film was made by Paul Lynch who directed Prom Night, a movie that is as great as this is terrible.

Also, Janit Baldwin from the much better movie Ruby is underused as part of the cast here and she’s made to have possibly the worst hairstyle I think I’ve ever seen in a horror movie. In fact, if they filmed her getting this brown bird’s nest of a ‘do’ instead of what we see on the island, it would be more suspenseful and horrifying.

Watch Prom Night, Ruby or Friday the 13th Part 2 instead of this turkey. If you want island shockers also check out Island of Death and Anthropophagus The Beast. But avoid this film. It’s an hour and a half you’ll never claw back.