A movie directed by a young Francis (Ford) Coppola and produced by Roger Corman.

One night, while out rowing in the middle of a lake, John Haloran, and his young wife Louise, argue about his rich mother’s will. Louise is upset that everything is currently designated to go to charity in the name of a mysterious “Kathleen.” John tells Louise that, if he dies before his mother, Louise will be entitled to none of the inheritance. He promptly drops dead from a massive heart attack. Thinking quickly, the scheming Louise throws his fresh corpse over the side of the boat, where he comes to rest at the bottom of the lake. Her plan is to pretend that he is still alive to ingratiate her way into the will. She types up a letter to Lady Haloran, inviting herself to the family’s Irish castle while her husband is “away on business.”

But then after this something happens that changes the course of the whole film (I’m not going to ruin the film for potential viewers). This was a brave move a la Psycho and Night of the Living Dead.

And it works brilliantly. In fact, everything about this film works amazingly. It’s a great film with a great premise, gorgeous cinematography, uniformedly good performances from a cast of unknowns and direction that deftly straddles both drive-in cinema and the Nouvelle Vague. This is part Homicidal (this was made to cash-in on it’s success) and part Carnival of Souls but whilst retaining it’s own identity. Theres a strong Giallo feel to proceedings- the gloved killer with an ax, the sinister doll symbolism.

The location used deserves a mention. A spawling castle in Ireland with a scene that takes place in a Dublin bar make this film even more special. It feels like part film, part time capsule. The costume design of the film is also something to behold- classic men’s suits (think Sean Connery as Bond and Michael Caine in The Italian Job), chic women’s miniskirts and the best bleached blonde 60’s haircuts seen in any film of the period.

When you recognise a murder weapon which could implicate a hacksaw wielding murderer who’s already killed two other people, what do you do? You go to stay in a remote secluded clifftop villa with your friends, that’s what! Nothing could go wrong…

This is a fantastic slice of giallo directed by Sergio Martino in 1973. It’s all here- the sumptuous locales, the amazing insistent music score, the deft and stylish cinematography and direction. But, best of all, there’s one of the most disturbing and iconic killers in giallo history (which is really saying something). And not only does he look great but he also kicks ass. 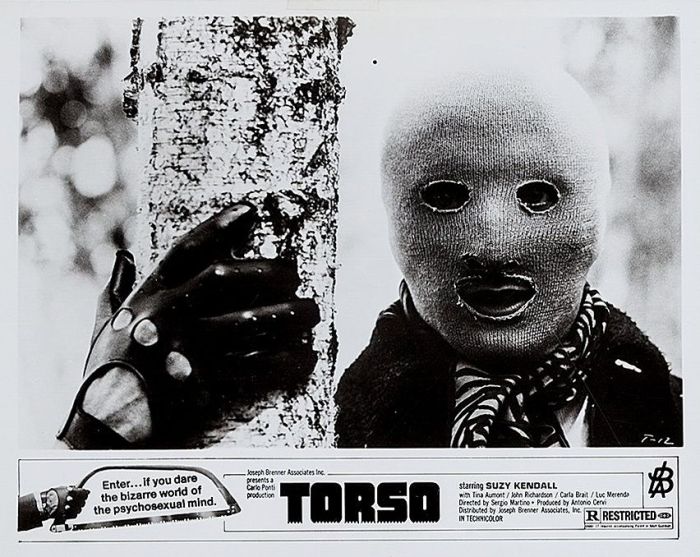 This film expertly builds tension with some scenes reminding me of the later Halloween. I wonder if Carpenter had seen this film before making the 1978 classic. I sure as hell hope the makers of the new Halloween film have seen this film (I bet I know the answer to that question but I’ll wait until this film is released to either have my hunch confirmed or refuted).

An example of this tension within Torso would be the scene in which the lone survivor is in the villa with the killer thinking that there’s no one else there. She’s locked in her room but decides to try to get the key which is still in the lock on the outside of the door to fall onto a sheet of newspaper which she’s slid underneath. This way she can slide the key under the door and try and free herself. But then…you’ll have to watch the film to find out what happens. It’s a great scene in a great film.

When it comes to giallo everyone seems to know the work of Dario Argento, Lucio Fulci and Mario Bava and for good reason. But Sergio Martino is an example of another giallo director who doesn’t get the attention he deserves. This is a shame as his work is stellar. And Torso is a great ‘in’ for the horror fan wanting to investigate his work.

A boat sails into New York but the only person onboard happens to be a morbidly obese zombie who seems to be pissed off and hungry. The daughter of the boat’s owner decides to venture to where her father had been, a Caribbean island called Matul. She takes along with her a journalist who smells a story.

This film was butchered by the BBFC on its initial release. The distributors decided to release a stronger uncut version that then lead to the film being banned and placed on the DPP video nasties list. 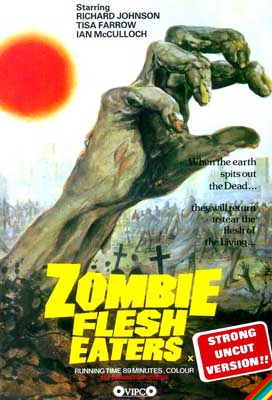 This film is reknowned for going the extra mile. Ever wondered what would happen if a zombie took on a shark? Of course you have! This film features it. Add to the mix a revolutionary eye-gouging scene, a great score by Fabio Frizzi and one of the most iconic ending scenes in horror history. Oh, and some of the most annoyed zombies with especially bad attitudes and you have a great movie.

This Italian shocker directed by maestro Lucio Fulci actually billed itself as a sequel to the Argento cut of Dawn of the Dead in Italy. Is it a masterpiece like Dawn? No. But its still one hell of a ride.

A successful writer Peter Neal is visiting Rome from America. He becomes aware that a serial killer is on the loose and strongly influenced by his work.

This film is staggeringly good. Prepare to be astounded by the tracking shot of the outside of the apartment block- one of the best shots I’ve ever seen in a film. Also, the scene where a characters arm is chopped off with an axe and her blood completely redecorates a wall. Directed with the usual flair and attention to detail and aesthetics that you’d expect from The Master.

This film also features an amazing turn by the legend John Saxon. Argento manages to coax a wacky, insane performance out of the actor which steals the show. Look out for the scene where he shows how his hat stays on no matter what. 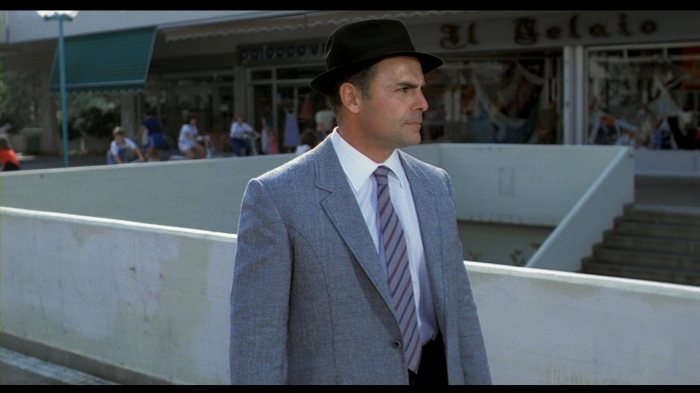 The ending is a master stroke also. I’m certainly not going to spoil the surprise here but its a corker and doesn’t feel forced or contrived.

This film came a cropper in Britain- it was mixed up in the 80s Video Nasties moral panic and was banned for years. There seems to be three vile repercussions of the DPP list- obviously the fact that it prevented the viewer watching what they wanted but also that masterpieces like Tenebrae were banned and much lesser films were immortalised. Wrongly so- some of the films on the lists should have disappeared without a trace otherwise.

Even the poster for Tenebrae caused a commotion. The original poster features the blood from a neck wound on a female victim. This was too much for London Underground who said that they wouldn’t display the posters as they were too graphic. Hence the red trickle of blood was instead replaced by a red ribbon for the UK posters and even the soundtrack art here. 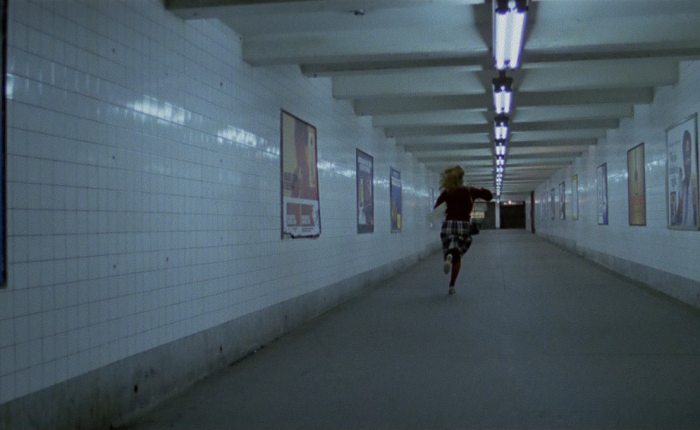 This film has quite a reputation. It was submitted to the British Board of Film Classification for a rating. But it didn’t receive a rating. The head of the BBFC was so disgusted with the film that he made sure it was actually escorted out of the country. Its still cut to this day after it was resubmitted years later. 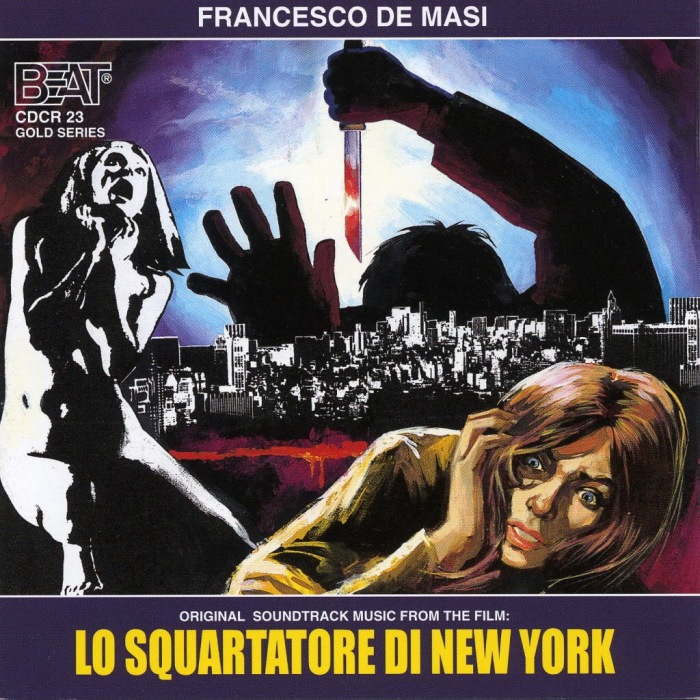 Does it deliver? In a word- yes! The murders are graphic, the violence extreme and the grime thick.

Yet its also beautifully shot and captures New York at its rotten 80s best. 42nd Street, prostitutes, the subway as a perilous way to travel, crime laden streets. Its all here.

And the killer has a Donald Duck voice.

Look out for the scenes involving the high class sexpot. Priceless.

One of the few Dario Argento films I haven’t seen. Until now that is.

And what a treat! A rock drummer notices that hes being watched by a mysterious stranger. He confronts this person in an abandoned opera house and after disarming him of a knife accidentally stabs him. This is all witnessed a photographed by an onlooker who wears a very unsettling dolls mask.

Even by giallos standards this is an amazing film- gorgeous locations, imaginative cinematography, brilliant quirky characters and last but not least, Bud Spencer is in this film. Bud Fucking Spencer! Whats not to like?

Another thing I love about this is that one of the characters is gay, camp and proud of it. Not once is he depicted as subhuman, deviant or somehow inferior. That means a lot- especially to a gay film critic. If Argento could imbue gay characters with some kind of dignity in 1971, why couldn’t Martin Scorsese recently in Wolf of Wall Street? Dario- loving your work.

I watched this on Shameless Entertainment’s Bluray release. Highly recommended- it does the film a real justice.