A Tigon film from 1967 regarding Marcus, a doctor (played by Boris Karloff) who practices hypnosis. His wife Estelle is also part of his practice as they search for a suitable subject for their experiments. Step forward swinging 60’s hip-cat Mike Roscoe (played by future Saint Ian Ogilvy) who Marcus picks up in a Wimpy bar (it sounds well dodgy, eh?!) Roscoe follows Marcus back to his house and his hypnosis machine whilst being promised good times with no consequence before Marcus uses the machine on him. 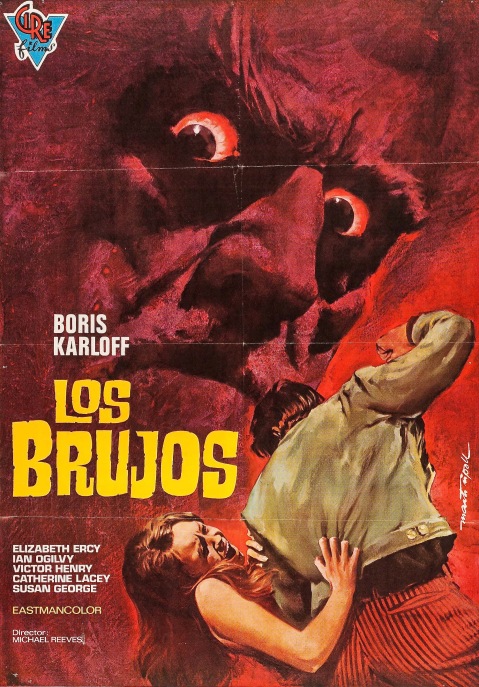 After undergoing the hypnosis machine (this sequence is very aesthetically pleasing. Think of the inner sleeve portraits of the band from The Velvet Underground and Nico album with the projectiles of dots over their faces and you’re almost there) we learn that Marcus and his wife are able to experience whatever Mike is experiencing (but this is a double-edged sword as any physical injuries that Mike sustains will also be inflicted on the couple) with the pair being able to influence this by planting thoughts in Mike’s mind to force him to do whatever they wish.

But with such an ability to control someone’s life there comes great responsibility and you will learn the controller’s true intentions and characters. Marcus becomes almost like an angel on Mike’s shoulder whilst his wife Estelle becomes the opposite and it isn’t long before she’s forcing him to beat up and even murder those around him. She even destroys the hypnosis machine when Marcus suggest deprogramming Mike’s current mentally malleable state.

This film is terrific but I knew it would be as it’s directed by Michael Reeves who made the similarly amazing Witchfinder General (aka The Conqueror Worm in the States). A fantastic premise, engaging characters but also very poignant as London life in the 60’s is captured beautifully from the ‘new’ of the hip clubs Mike resides in through to the ‘old’ of the streets, pubs and newsagents of everyday life. This film is like a time capsule and photographed handsomely.

The cast are uniformly brilliant but it’s the covertly evil Estelle, the Lady Macbeth of the film who steals the show. Her performance is astonishing as her face and eyes seemingly mutate and become more evil as her character does.

This Tigon film takes place in Swinging London as we see a bunch of twentysomethings at a party who then decide to liven things up by going to an old out of town mansion that is reported to be haunted. The backstory as to why is that the family who used to lived there twenty years previously had all been butchered by a family member.

Things go awry when the group decide to split up and explore the inside of the property with candles. Two members of the entourage are then killed with the rest fleeing the mansion in fear for their lives. The police then investigate.

The film explores an interesting conceit that the group members who weren’t murdered and escaped now have to grapple with regarding the murderer. Was it someone already at the mansion or more shockingly, was it a member of their group? Paranoia and ennui ensue.

The version of this film that I saw was a 2K restoration and looked gorgeous. The colour palate for the film is shown off beautifully with the finest in late 60’s mind expanding fashions being shown in all their glory. The interior design is just as ‘of the moment’. 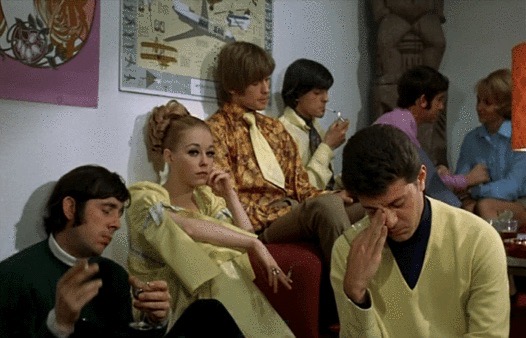 Frankie Avallone stars as the only Yank in the film (he also looks like he’s been beamed in from the 1950’s) whilst his co-stars include Richard O’Sullivan and Jill Haworth.

The kills are just as lurid, colourful and ‘pop art’ as the fashions with the blood being bright vivid red and very paint like. It’s aesthetically pleasing and reminds me of the blood used in George A Romero’s masterpiece Dawn of the Dead a few years later.

But whilst the film looks great and acts as a time capsule for what was going on in 1969 (albeit a sanitised filmmaker’s version), the rest of the film is a bit pedestrian. The police investigate, the groovy bunch decide to go back to the mansion to look for clues (!) and then the film concludes (no ending spoiler here). It’s mostly unremarkable with bland characters, not much plot and middle of the road dialogue.

A bit like one of the groovy beautiful characters in the cast, the film looks great but is quite empty. A shame.