I first heard about the film Phantasm (1979) when its sequel came out in 1988. I hadn’t even heard of the first film but I was intrigued. My sister in law had acquired some old pre-cert VHS tapes that she passed onto me. They were Phantasm, The Rocky Horror Picture Show and Motel Hell. All kick ass warped movies that were perfect choices.

I watched Phantasm and wondered what kind of drugs these people must have been taking when they made this film. There were so many surreal and disturbing elements to the film that just seemed to come out of nowhere- The Tall Man, the silver spheres, the severed finger that becomes a murderous fly from Hell, the elderly clairvoyant and her grand daughter… This was the exact opposite of today’s horror movies where filmmakers think that the average IQ of someone watching their movie is in minus figures. Thus they feel they have to explain every single little detail in the film rather than leaving them unexplained and realising that this adds mystery whilst granting the viewer a modicum of intelligence. This film created its own universe and laws of logic in much the same way The Texas Chain Saw Massacre did. It was…out-there!

I also loved the funereal style soundtrack written for the film. It lends it a morbid tone completely in keeping with the Morningside Mausoleum and the events that unfold there.

I’m still elated at the news that Blue Sunshine is getting the 4k treatment. I’m over the moon that Phantasm is getting the same treatment also. Its a long way from watching an old VHS tape. 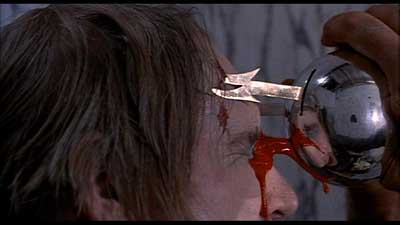