I first saw this amazing piece of nighttime New York craziness on VHS like many other cult cinema fans. The first video releases here in the UK were the kind of films that were supposed to appeal to a young demographic and so action, horror and sexy coming of age comedies were all widely available and marketed with gawdy, lurid artwork. This made going to the video store such a brilliant experience.

It contains one of the best opening scenes for a film ever- the Wonder Wheel at Coney Island all lit up with the darkest most twisted analogue synth you’ll ever hear over it. This film concerns the gang known as The Warriors travelling into the heart of New York to go to a gang summit wherein the leader (Cyrus) of the most powerful gang lays out a plan for the gangs who outnumber the police to take over the city. This would have been a brilliant premise for a film anyway but then Cyrus is shot and word spreads (via the guilty party) that it was actually The Warriors who are responsible. And so they have to make their way home unscathed. So already this film deserves kudos- to take a plotline and completely eschew it in favour of a completely different story. Inspired.

The film plays like some very dark and nightmarish comic book set in the near bankrupt and life-endangering New York of the 70s. Each gang has its own identity complete with dress, hairstyles and, sometimes make-up (check out the uncredited gang in the opening sequence who are dressed and made up as evil clowns). I love the depiction of New York as completely crime-ridden and downright dangerous. The Big Apple is rotten to the core. This was also evident in the opening credits of The Equaliser

The film also depicts the danger of youth in the same way that A Clockwork Orange does. In the eyes of the right wing tabloid readers the teenagers of the world are running rampant and are responsible for almost every crime under the sun. This would also be evident in some of the Public Information Films from the 70s

This film also contains one of my favourite scenes from any of the films I’ve ever seen. The Warriors finally make it onto a subway train after having to literally fight their way there. This short scene says more than a dozen sociology books could try to convey.

The film was released and was an instant hit. It grossed $3.5m in its opening weekend. However there were incidences of violence between real life gangs who went to see the film. It has been noted-

”The following weekend the film was linked to sporadic outbreaks of vandalism and three killings — two in Southern California and one in Boston — involving moviegoers on their way to or from showings.

This prompted Paramount to remove advertisements from radio and television completely and display ads in the press were reduced to the film’s title, rating and participating theaters. In reaction, 200 theaters across the country added security personnel. Due to safety concerns, theater owners were relieved of their contractual obligations if they did not want to show the film, and Paramount offered to pay costs for additional security and damages due to vandalism.

Hill later reflected, “I think the reason why there were some violent incidents is really very simple: The movie was very popular with the street gangs, especially young men, a lot of whom had very strong feelings about each other. And suddenly they all went to the movies together! They looked across the aisle and there were the guys they didn’t like, so there were a lot of incidents. And also, the movie itself is rambunctious — I would certainly say that.”

The film would go on to make $16.4 million at the box office- far more than the budget it was made on.

Eagle eyed cineastes may have seen in the film American Gigolo that there is a huge billboard advertising The Warriors in LA. This appears to have been crossed out by another gang who have initialed their handiwork as VGV.

This was actually a piece of cross-film advertising by the same studio Paramount who had a West Coast gang film out at the same time called Boulevard Nights. 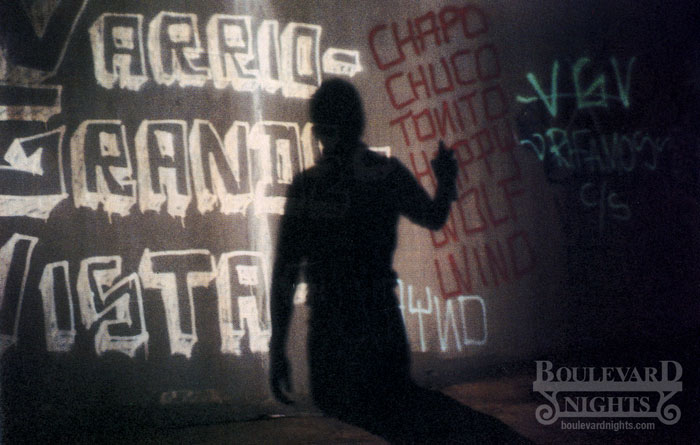 To go even further Paramount actually started showing double-bills of the Warriors and American Gigolo in selected cities around this time. This is a brilliant but puzzling double-bill.

More about this can be read here.

Rather bafflingly the film was also a favourite of President Ronald Reagan. Did he not see any echoes between the nightmarish vision of New York crime and the real New York?

If you’re going to watch this film please look for the original version rather than the Director’s Cut in which the director felt the need to insert comic book style panels. Mr Hill- we all already knew the film was intended read like a very dark comic book. Please don’t patronise us.