A bigger budget, a remake of sorts, this film was released when the video nasties furore was petering out. People were starting to see that horror movies wouldn’t turn the working class oinks into bloodthirsty serial killers or even adversely affect their dogs (as Graham Bright so hilariously claimed) but could be considered as art and great entertainment to boot.

This film was held up quite rightly as one such film. Raimi’s imagination goes into overdrive with this entry as we have Ash battling his own hand, chopping it off and replacing it with a chainsaw. Groovy. My favourite character has to be the mounted moose head that suddenly comes back to life. 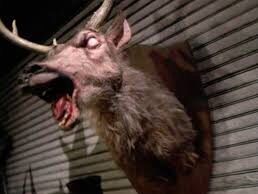 This really is one of the most franetic, kinetic pieces of film I’ve ever seen. We also get to see Ash as a Kandarian demon. Brilliant. And the premise for the next film in the series is established at the end. And theres no CGI. Hooray. There is so many great scenes in this film that its impossible to cover even a tiny amount of the insanity. Watch this film and fasten your seatbelts.

Highly recommended. 4 out of 5