Following a mugging in which his wife was killed and he was made a quadriplegic, Grey Trace has an AI chip installed into his neck that makes his seemingly super-human. He then goes after the bad guys who killed his wife and left him for dead.

I knew nothing about this movie but just knew that it was critically acclaimed (Thank you, Rotten Tomatoes) and so rocked up to the screening. I was amazed! This film is fantastic.

Yes, leading actor Logan Marshall-Green looks like Tom Hardy’s twin. Yes, the film’s plot seems eerily close to the storyline of Hardy’s upcoming Venom. Upgrade is a great film and will quite possibly be in my list of the year’s best films. 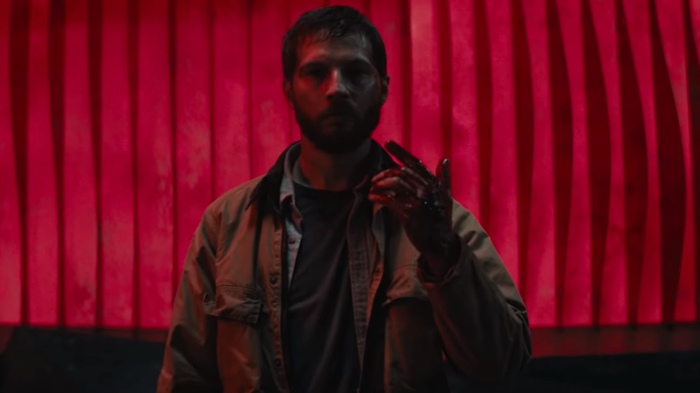 The action sequences are terrific and theres more of a passing nod to a comic book type vision for the film’s look and feel. Check out the bar that Grey goes to to try to find his wife’s killers.

But there’s also emotional depth here. This is especially seen in the scenes where Grey tries to adopt to life in a wheelchair with his mother taking over the small tasks of everyday life that he could do before the mugging. The scene in which he bursts into tears at his own newly discovered inability is unexpected but very welcome in a futuristic action movie like this. It provides extra layers to a movie that in lesser hands would be more generic fare. He is later seen trying to take an overdose.

Whilst there is gritty action and heartbreaking emotional depth to the film there is also laugh out loud humour also. Check out the scene where Grey fights an adversary with STEM in control for the first time. Marshall-Green’s comic timing is impeccable.

Some of the action sequences end gorily- in fact, very gorily. There was more than one occasion during the screening in which audience members where audibly grossed out at special effects that seem to be straight out of a video nasty. And if you’re a gorehound like me thats a great thing.

In fact, one gore scene reminded me of the left sequence from Drive. There are faint echoes of many other films within Upgrade (including The Matrix, 2001, Scanners, Blade Runner and it’s sequel, Westworld… Hell, it even reminded me of Knight Rider. Yes, it’s that good!) but you never get the feeling that Upgrade if ripping off these ideas and blending them together, hoping the audiences and critics won’t notice. Upgrade feels fresh, original and innovative- because it is.

An amazing film- don’t miss it.