Jojo is a proud Hitler Youth member. He decides to go on a weekend for fellow brainwashed enthusiasts. However, after a (very funny) accident with a grenade he finds himself hospitalised. At home recovering he discovers that his mother is hiding a Jewish girl in their home. He confides this to his imaginary friend, Adolf Hitler (!)

This film is actually a comedy! An off the wall, zany and irreverant comedy that works beautifully. It was a massive gamble to make such a film in such oversensitive and ‘woke’ times. And it was Disney of all studios that made Jojo Rabbit! Should such a terrible period from history be depicted in such a chirpy and comical way? Should Hitler be portrayed as such a goofball within the film? YES! Whether it’s Mel Brooks (who said he loved JoJo Rabbit) with The Producers and it’s musical Springtime For Hitler or Joan Rivers making her controversial joke about the Holocaust on Fashion Police, humour reaches the parts that more earnest and serious pieces of ‘art’ can’t. It forces you to laugh at whatever is the target of the joke is and then analyse why you laughed at something that you normally wouldn’t see as comical. 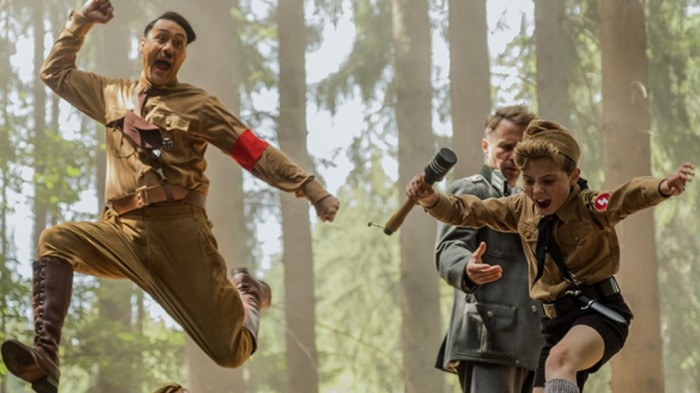 Whilst most critics have lauded the film, there are peripheral pundits who have either said that the filmmakers have gone too far (How dare they make a comedy starring Adolf Hitler?!) or that they didn’t go far enough (How dare they make a film about Nazi Germany and not show the full horror of what happened?!). The Guardian hated the film which is another reason for audiences go and see this gem of a film.

But, understandably, everything depicted in the film isn’t just for laughs. There are plenty of gut-wrenching moments when the full horror is brought home to the characters and audience alike. These poignant sequences aren’t milked for all their worth and this makes them all the more powerful and genuine. There were a couple of pivotal scenes which made me fight back tears. These scenes were played out for what they were without the whole film descending into a tissue-soaking cry-a-thon which would have cheapened and devalued the movie’s content.

The film also looks beautiful with set designs and a colour palate that makes Jojo Rabbit a feast for the eyes. This film is beautifully constructed. Jojo’s room, the house in which he resides, the cubby hole that houses Elsa and the surrounding environs are all aesthetically pleasing and a joy to behold. 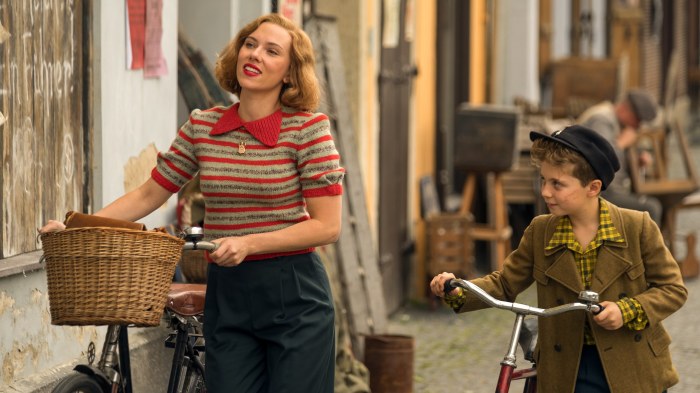 Also, check out the framing. Every scene feels just as quirky, off-kilter and as warped as the narrative. Watch out for the scene on the giant steps and the later scene with it’s emphasis on a character’s shoes and how this motif is used later on in the film in an extremely heartbreaking but dignified and tasteful way.

The soundtrack is also fantastic with The Beatles’ German language version of I Wanna Hold Your Hand (‘Komm, gib mir deine Hand’)  and Bowie’s Helden leading the way. In fact, these two rather obscure (to English eyes anyway) versions of well known songs normally heard in their Mother Tongue depict the whole feel of the film- off kilter, eschew and very original.

There are uniformly amazing performances by the likes of Roman Griffin Davis playing Jojo, Scarlett Johannsen as his mother, Thomasin McKenzie as Elsa the Jewish hideaway and Sam Rockwell (great to see him taking more risks with his choice of roles after starring in the ultra-woke and unbearable Three Billboards). Also, look out for Stephen Merchant as a very sinister Nazi inspector. He reminded me of The Demon Headmaster. But it’s director and screenwriter Taika Waititi who plays Adolf Hitler who steals the show. Every scene that hes in is comedy gold as he depicts Hitler as a kind of bro/dude best friend to Jojo. His lines and mannerisms are laugh out loud hysterical.

4 parts humour, 1 part sentiment, this film has a power that will seep into your brain during it’s running time and stay with you long after the film is over. In fact my first thought on leaving the cinema was that I wanted to see it again.

I feel privileged to have seen one of the best films of 2020 on Jan the 1st of this year. A cracking start to a new decade of movies.