Fat nurse Martha Beck is joined into a lonely hearts club by her best friend Bunny. Almost instantly she starts to correspond with a man called Raymond Fernandez. Their correspondence grows more intense with the bond between them being so strong that Martha invites him to her home in Mobile, Alabama. After a night of wild passion he leaves her to go back home but not before he has secured a loan from her.

She then receives a letter from Ray breaking up with her which causes Bunny to ring him to say that Martha is suicidal because of this. When Ray is relieved to find out that neither of them have involved the police, he invites Martha to New York to visit him. When she gets there he lets the cat out of the bag- he is a professional hustler who cons lonely women out of their money and moves onto his next target. Martha is so in love with Ray that she stays by his side and even becomes his accomplice as he commits his next crimes.

This movie is based on the true life crimes of a couple dubbed The Lonely Hearts Killers with the film using their real names. The film was also originally to be directed by a young director named Martin Scorsese (wonder what happened to him) but he was fired several days into the shoot as he was just taking so much time getting master shots set up whilst not shooting any coverage shots (according to himself. He even went on to say that it wasn’t probably for the best for the film that he was fired as the film was made on a low budget and needed to be shot quite quickly). Leonard Kastle stepped into the breach instead and does a phenomenal job. The film looks gorgeous and is framed to perfection. It’s almost like any frame from the film could be hung in an art gallery and admired. The monochrome look of the film is also astounding and reminds me (as does the film as a whole) of Brian De Palma’s masterpiece Sisters.

The cast are exceptional also with Shirley Stoler utterly iconic in her role as Martha and Tony Lo Bianco also iconic and perfect casting as the money-hungry lothario Ray. 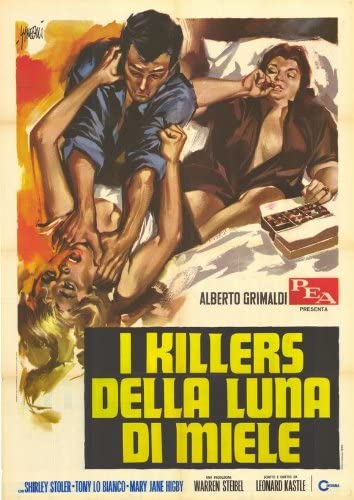 This movie is on The Criterion Collection as it deserves to be. In fact, when I rewatched the film for this review I was getting strong John Waters’ vibes from it. It was almost like a lost Waters film from around the time of Multiple Maniacs (also deservedly on Criterion) and I could imagine either Divine or Edith Massey playing Martha and Tab Hunter playing Ray. Maybe in a parallel universe this movie was made.

Apparently Francois Truffaut named this movie was his favourite American film. And if that doesn’t act as a high enough recommendation for you to see the film then I don’t know what will.