Along with most other households in the UK for members of Gen X (the best generation by the way), we had the soundtrack for the film Grease. When the film was finally shown on UK TV I recorded it and watched it fat too much. It was a ‘go to film’ for a time when I was young. 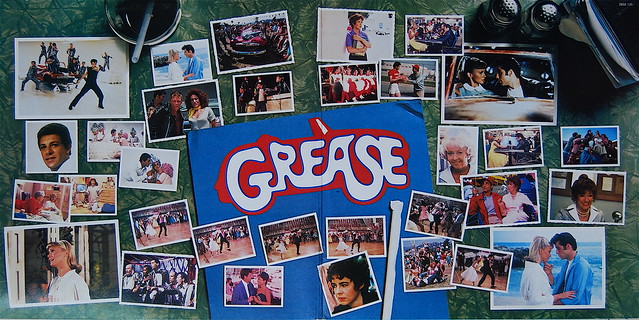 But this was stopped when I asked my brother’s new girlfriend if she liked the film and soundtrack. She frowned and said ‘It’s a bit tacky…’ This stayed with me. How could I have been into something so lacking in sophistication and tacky?! My love for Grease abruptly ended.

I found myself recently revisiting the film when it was shown on TV again. Would I cringe and snigger whilst wondering how I could have possibly have watched such rubbish as a child? No! I loved it!

For those who have been living under a rock since 1978, the film concerns the holiday romance between Danny Zuko and Australian Sandy Olsson. As Sandy finds that her family are staying on in America rather than returning to Oz she starts at Rydell High School, not knowing that Zuko attends there. She also doesn’t know that he is the leader of a greaser gang known as The T-Birds. This leads to the tough and streetwise Danny she meets rather than the sensitive and caring Danny she knew from her summer holiday. Sandy is taken under the wind of a girl gang known as The Pink Ladies led by the inimitable Rizzo.

I love how theres another layer to the wit within the film that completely went over my head when I was a kid. Grease is full of filthy references as the teenagers characters (most of whom look like they’re actually at least 35) are unabashedly full of hormones and lust (except the pure and virginal Sandy). And so we get fantastic ‘blink and you’ll miss them’ gags such as a car door being slammed on Danny’s erection at the drive-in after he tried to get it on with Sandy and the appearance of the cling film during the Greased Lightning sequence.

And then theres the music which is just as steeped in nostalgia and a lost era as the film’s visuals and narrative are. And just like the rest of the film, the songs are just as funny. Possibly the greatest of these is the Beauty School Dropout sequence resplendent with Frankie Avalon. Surreal, hilarious and utterly inspired.

But there are also poignant musical moments such as Sandy singing Hopelessly Devoted To You and Rizzo’s There Are Worse Things I Could Do. This isn’t a one note movie.

Grease originally started as a stage musical on Broadway  in 1972 and was instrumental in a revival of all things 50’s Americana in the 70’s which continued with American Graffiti and Happy Days. The film imbues the same wistful nostalgia which is gleefully part fact, part fiction as times gone by normally are when viewed through rose-tinted glasses. This doesn’t matter a jot however as Grease is still a fantastic piece of escapism.

In fact, theres very little difference between this and say, John Waters’ Cry Baby which just goes to show what a fantastic era both films draw inspiration from and how close to the bone and risqué they are.

Grease has also been the subject of many different kinds of film analysis. My favourite is the one that sees it as a lesbian text with Sandy being ‘femme’ and Danny being ‘butch’.

Grease is a film that was the highest grossing of 1978, with the soundtrack being just as successful when it came to record sales. And it was utterly justified.

Watching Grease after so many years was like being visited by an old friend.