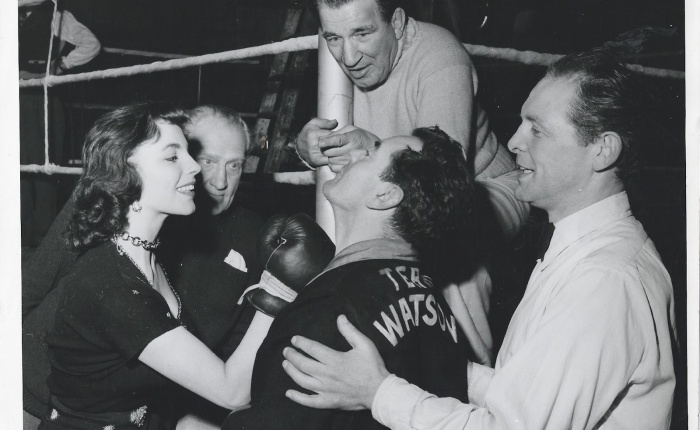 A British film from the 50’s about professional boxing. We get to meet those fighters who participate in a one-night event that involves a programme of many fights.

This film is like a snapshot of a long lost era of British filmmaking. We have great characters, a sly sense of humour at play and grit in the way the sport is portrayed as completely corrupt and in turn corrupting.

The film also shows how truly brutal the sport is. The ending is totally gut-wrenching and completely unexpected.

We also get British film royalty in the guise of legends such as Joan Collins, Joan Sims and Sid James as part of the cast.

Yield to the Night finds the character of Mary Price Hilton shoot her boyfriend’s lover and then spending her time in prison awaiting her execution by hanging. Her story is told in flashback during this stay.

On the 7th day God created Diana Dors. From her TV appearances on The Two Ronnies (playing the head of a female army who wish to take over and make all men subservient) through to her appearance in the Adam and the Ants video for Prince Charming, Ms Dors was a regular part of my childhood.

I then discovered the TV series of Queenie’s Castle from the 70’s (filmed here in Leeds) which fully exuded Dors’ abilities as a great actress.

Yield to the Night was the only worthwhile foray into film for Diana with subsequent vehicles being a complete waste of her talents. This film is amazing. The flashback sequences which show how a sultry goddess could be driven to murder are fully rounded, believable and achingly painful. As are the sequences in which she is in captivity. Check out the internal monologues we’re privileged to partake in and how she is far from a blonde bimbo. These observations about her plight and her fate are reminiscent of Travis Bickle’s musings in Taxi Driver. 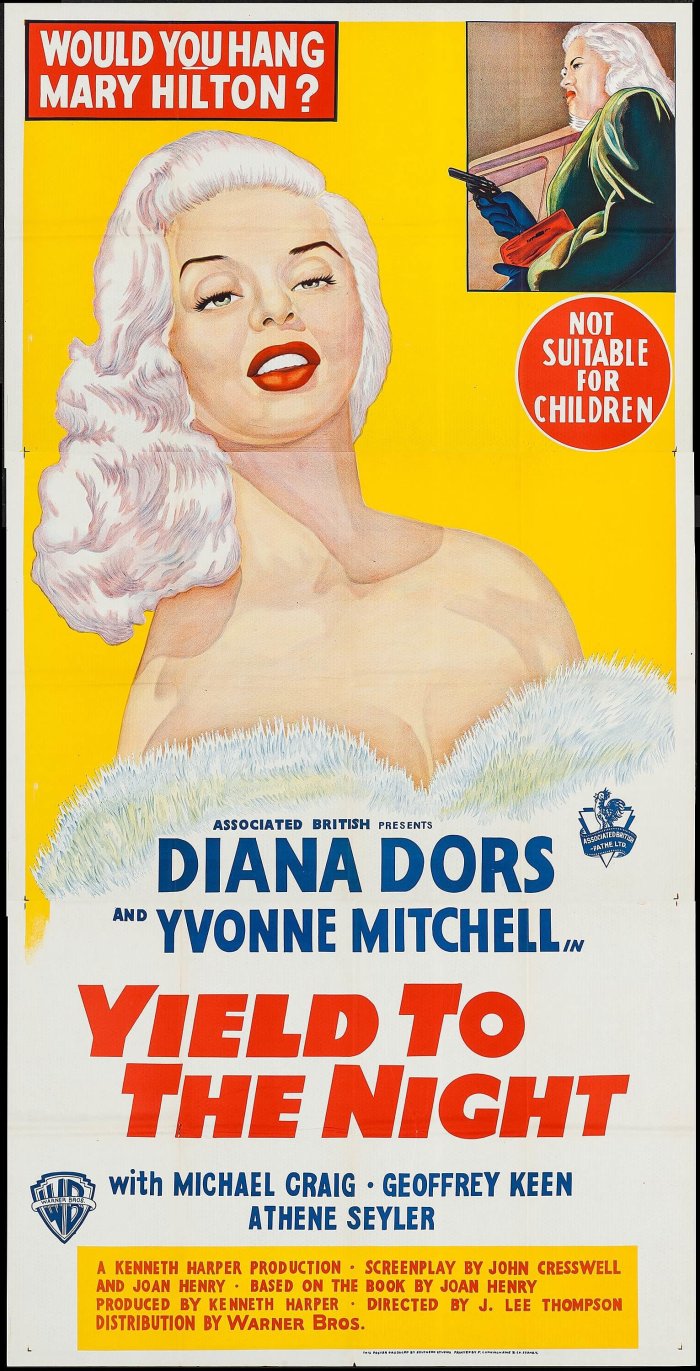 A strong case is made for the brutality of capital punishment in a ‘civilised’ society and how wrong it is. Thankfully since the film’s release this has now been rectified. You will think of this film when someone comments ‘They should bring back hanging’ in response to a news story.

A young ex-boxer and a priest team up with the sister of a victim of the local mob to find out who killed her brother and try to stop the mob from unfairly controlling all of the work and wages that should be going to the dockers in the area.

This is one of those films that everyone says is a classic but I hadn’t got round to seeing. All I can say is- the people who say this is a classic are undervaluing the film greatly. I knew as I was watching this that one of my favourite films that I hadn’t even seen for the first time from start to finish yet was unfurling before my very eyes. 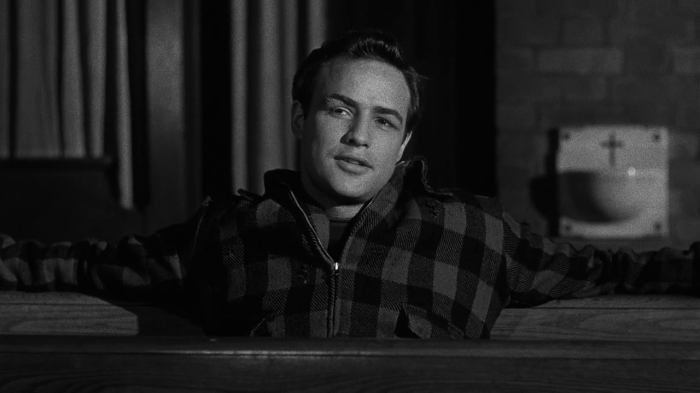 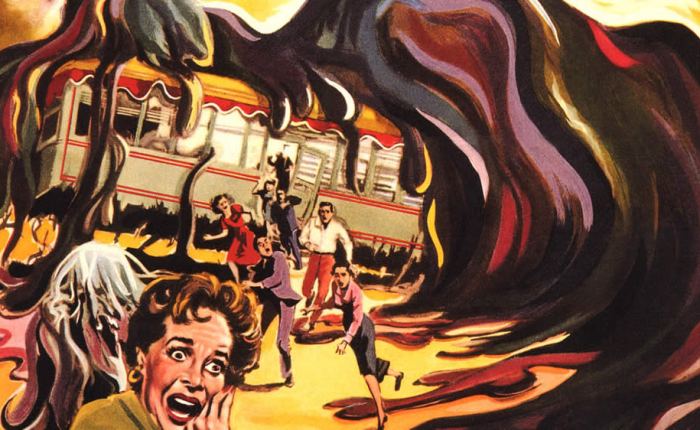 I haven’t seen this since I was a kid and I loved it. Would this film still be as enthralling now that I was a world weary and cynical adult?

The film was made in 1958 and concerns a mysterious meteor that crash lands on Earth and releases a gelatinous type living organism that engulfs and eats anyone that gets in its blubberous path.

This film is gorgeous. From the nifty title sequence-

right through the to the locations used-

This film is as 1950’s America as apple pie, Coca-Cola and hamburgers. If Norman Rockwell made a sci-fi film this would be it.

The film also features the debut performance of a new young actor named Steve McQueen. He does a great job as the all American teen who is inquisitive, plucky but considerate. 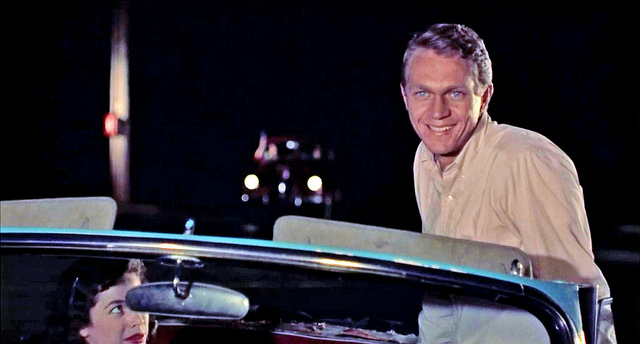 Whilst the movie and its characters could sound like some kind of 1950s propaganda film regarding the wholesome American way of life the film is never cloying or irritating. The characters are quirky, likable and engaging.

You get the impression that was made for the drive ins and indeed it was. When it was originally released it was released as a double bill with I Married a Monster From Outer Space. But The Blob was quickly given a release all of its own as soon distributors felt that the film merited it. It certainly does- yes its shlock horror from the 50s but its one of the best examples of this and aesthetically its beautiful. It also captures perfectly a time in American history that was truly iconic.

The actual blob could be seen to signify the creeping growth of communism which was seen as the number one evil in America at this time. The most obvious signifier of this is that the blob is bright red. Also the way that the organism engulfs and takes over its prey is testament to that line of thought.

The films ending is also like some kind of wishful thinking- the characters in the film discover that the creatures doesn’t like the cold and so use fire extinguishers containing CO2 to destroy the monster. But the film is left open- there could be a sequel/reappearance of the threat of communism! Be afraid, be very afraid. In fact there was a sequel made called Beware The Blob in 1972 and directed by none other than Larry Hagman.

I wondered about the legacy of this film and if it was well respected in American culture and the medium of film specifically. And then I saw that it was- this is evident because it was released on Blu ray on the prestigious Criterion label in the States. High praise indeed and thoroughly deserved. This film is much more than just a classic movie- its a time capsule.