Ahh, the giddy days of home video. In the early days of this new and very exciting medium, there were loads of videos that featured the gaudiest and lurid cover artwork.

One film that had such artwork that I will always remember was The Exterminator. The box depicted a muscled man wearing what looked like a black motorcycle helmet whilst firing a machine gun. It suggested something grittier than your average action flick. 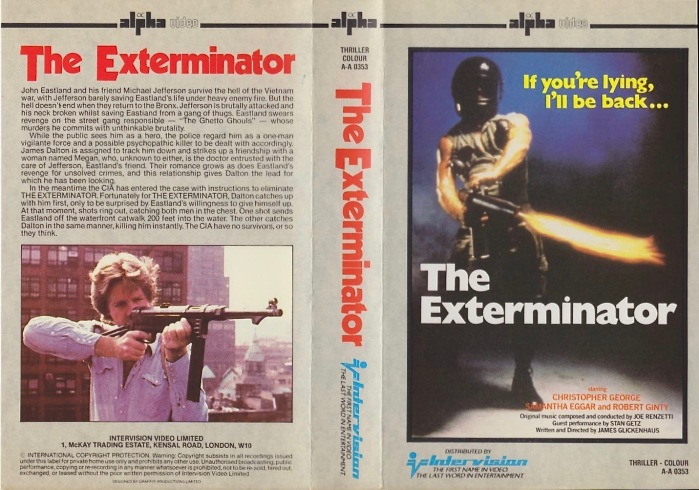 When I finally saw the film I wasn’t disappointed.

Robert Ginty plays John Eastland who we see in the film’s opening scene as a soldier being captured by the Viet Cong. He escapes after being saved by his best friend Michael Jefferson (but not before he sees another friend being beheaded, a scene that would prove problematic for the BBFC. Stan Winston was the SFX whizz who designed the dummy for this scene, film fans).

The action then transfers to a jungle of another kind, New York. Eastland and Jefferson are working together in a warehouse. After seeing gang members stealing a shipment of beer, they are confronted by both men with Jefferson kicking their asses. However, the gang members track him down and leave him crippled (another graphic scene that would be excised in different countries).

This propels Eastland into action as he becomes a one-man vigilante who tracks down the gang members and then the mob who have been making his employer pay protection money and even skimming the top off all of the employee’s wages.

The Exterminator is gritty, extreme, VERY gory and brilliant fun. Director James Glickenhaus knew exactly the audience he was aiming this film at. This was aimed squarely at the audiences who would go to see films in 42nd Street grindhouses (part of the film even takes place in some of the sleazier establishments of The Deuce), drive-ins and as part of midnight movie double-bills (The Exterminator played with The Postman Always Rings Twice (!) in the UK). 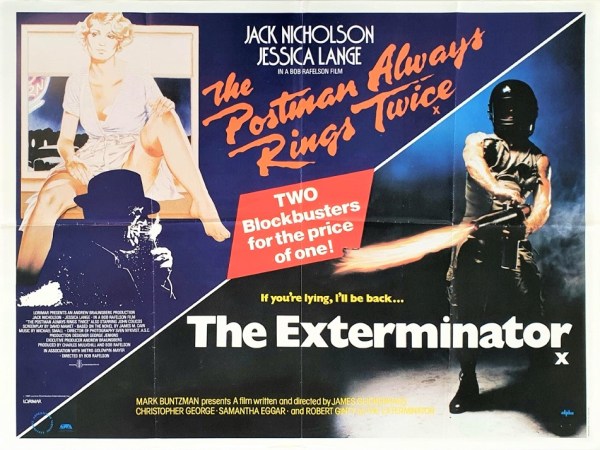 But it was also made for the new medium of home video on which the genre of horror or exploitation wasn’t seen as a bad thing but instead as a major selling point. With so many shocking and lurid video artwork being on the shelves of the video shops I spent hours in, the artwork for The Exterminator still screamed out to me.

People have criticised Robert Ginty in the lead role as being devoid of the necessary charisma or leading role chops for such a film. I disagree. Ginty plays an everyman, someone who is sick of being pushed around when there appears to be no real justice by conventional routes of law and order. Of course, there are strong links between this film and Michael Winner’s masterpiece Death Wish but there are also links to Taxi Driver, Maniac and The New York Ripper because of the themes, locales and time frame.

Look out for the uncut version of The Exterminator as there are plenty of versions, especially in the UK, that are cut. I bought the DVD distributed by Synergy who had submitted the film to the BBFC a second time to try and get some of the previous cuts waived. They then proceeded to release the film uncut anyway and completely ignore the 22 secs of cuts the board had recommended. Hooray for Synergy!

One review of the film says that Glickenhaus knows nothing about framing, lighting or direction in general. Poppycock! When I saw the film in widescreen for the first time I noticed these very aspects and marvelled at them. The film is lit, directed and coloured like a very gory comic book. It’s beautiful to behold and reminds me of The Warriors.

You know you’re in for a good time when the death scenes within the film involve an industrial mincing machine, a flamethrower and an electric knife.

The Exterminator will always hold a special place in my black little heart.