I Miss The NFT

You may recall me talking about the NFT (National Film Theatre) in a piece I wrote recently about going to see Friday the 13th Part 3 in 3D there.

It got me to thinking about when I went to see films there and the fact that there were critical analyses handed out for each film being shown so that the serious film connoisseur could peruse it before the film started. I wondered if I had kept any of the ones that I received. I have kept most of my ticket stubs, did I save these handouts also?

I just got notified on Facebook of what I was doing in years gone by. A few years ago I had scanned ticket stubs and keepsakes and dated them appropriately after putting them on my FB timeline. And one of these handouts came up! 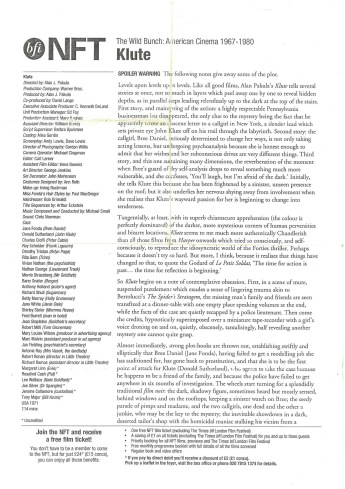 This is one such handout from when I went to see Klute as part of a 1960/70’s film season reflecting New American Film. The handout even has discolourisation on it from where it was in my pocket!

I saw The French Connection, Taxi Driver, Raging Bull and The Warriors amongst other gems as part of this season.

I miss the NFT. But the world doesn’t revolve around London anymore (unless you’re stinking rich and woke) and I have plenty of great film establishments here in Leeds to more than satisfy my film needs.

Still, the memories come flooding back.