Land of the Dead is George A Romero’s next instalment in the Dead series after 1985’s pedestrian and plodding Day of the Dead.

This involves the human race who are still at the mercy of a world overrun by the undead and now being split into the ordinary folk who are forced to live in slums whilst a few privileged individuals live in luxury in a part of Pittsburgh called Fiddler’s Green.

Whilst the zombies in the film are shown being unfeeling killing machines, so is Kaufman (brilliantly played by Dennis Hopper) who resides over Fiddler’s Green and the rest of the city. It is understood that he engineered the whole new division of the slum dwelling majority and the richer minority who live in luxury.

There are analogies abound within the film with parallels being made between the film and the real America at the time of the film’s conception. The majority of American society have to scrape by to survive yet those who are in control have unfair access to the rewards and luxuries afforded to them because of it. Kaufman is shown to be completely devoid of empathy, humanity and scruples. His character is blatantly based on a certain US President who was in power at the time.

There are also comparisons between the zombies and the slum dwellers at the end of the movie with the undead leaving alone the surviving subjegated humans. The zombies also show signs of intelligence within the film with them making the trek to Fiddler’s Green by learning that they can travel underwater. There are also examples of them starting to use guns and firepower during the film’s running time. 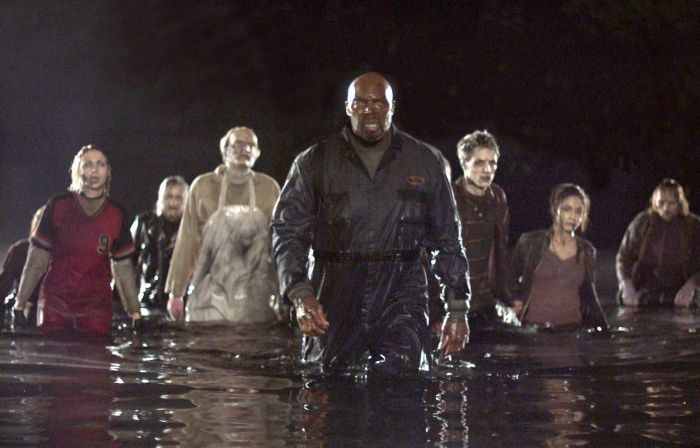 But the film’s moral message feels very heavy handed in retrospect as well as being way too simplistic and a bit too ‘right on’. Theres no nuance.

That being said this is a zombie flick with the undead kicking ass, looking amazing with action sequences coming thick and fast. But whereas Day of the Dead, this film’s predecessor was too ‘talky’, some of the action here feels a but hollow and almost like filler.

A satisfactory film but not a great one.