A pastor goes to Nigeria and accidentally unleashes an ancient malevolent spirit. Oops. His daughter-in-law back in America then starts to change from being a God-fearing, wholesome wife to becoming a possessed randy harlot.

This film is such good fun. The pastor is played by William Marshall who was already known to Blaxploitation audiences as Blacula. Austin Stoker also stars who would later feature in John Carpenter’s masterpiece Assault on Precinct 13 a couple of years later. But it’s Carol Speed as Abby who steals the show. She seems to truly relish her role and brings some much needed spice and vigour to it.

There’s groovy interiors, snappy dialogue and effects that look cheap and nasty even by Exorcist rip-off standards. In fact they make Beyond The Door’s FX look highly innovative by comparison. But that’s all part of the fun.

I love the fact that the exorcism at the film’s conclusion takes place in a downtown bar.

This film made loads of money at the box office but was abruptly taken out of circulation when Warner Bros. issued a lawsuit as they stated that the film ripped-off The Exorcist a bit too much. Abby’s director William Girdler never denied this. The only existing prints are in very bad condition and it’s rumoured that a decent print hasn’t surfaced yet as possibly the lawsuit is still in place which prevents a decent DVD/Blu ray release. It’s also rumoured that the lawsuit also involved all copies of the print to be confiscated by Warner Bros. so that they could destroy it. 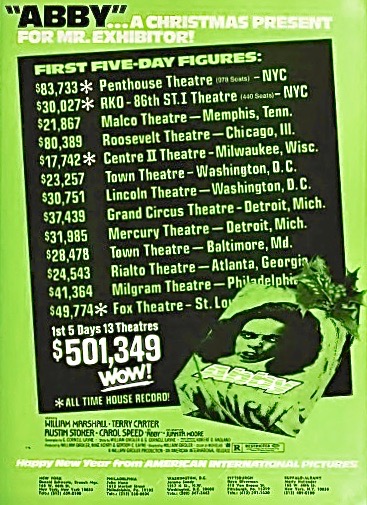 I hope this isn’t true. I’d love this film to be released after being restored. In fact, I’d love a Blu ray box set containing all of Girdler’s films. He deserves to be recognised as one of the leading auteurs of brilliant exploitation films.