Small town vigilantes wrongly accuse a mentally challenged man of attacking and killing a little girl. It turns out he didn’t attack her but saved her from a neighbour’s vicious dog. The vigilantes find this out just after killing the innocent man who is disguised as a scarecrow. Oops. When the local courts offer no justice, the vigilantes start getting bumped off one by one.

This is actually a TV movie and is a cracker. It built up a cult following amongst horror fans and is one of the best horror TV movies ever made.

The film feels authentic and depicts the bloodthirsty lynchmob really well. We see during the course of the film that these people are the true simpletons of the piece. We also see that a group of people who are desperate for violence and maybe more don’t need any justification for it. Its also interesting that the members of the lynch mob are all depicted as being fine upstanding members of the community (the postman, mechanic, farmer etc) whilst being completely hellbent on inflicting their lawless brand of ‘justice’ on someone whos just a bit different.

This film has a great cast that is like a whos who for horror fans. As well as Larry Drake from Tales From The Crypt, Charles Durning who amongst other things was in When a Stranger Calls, John Houseman from the original Hills Have Eyes and Ed Call who played Glen’s (Johnny Depp) father in A Nightmare on Elm Street.

The tension in certain scenes is built up to nailbiting levels and the direction and screenplay are top notch. This is the perfect example of a TV movie that was so great that it transcended its medium and was given a VHS and DVD release. And deservedly so. This is brilliant. 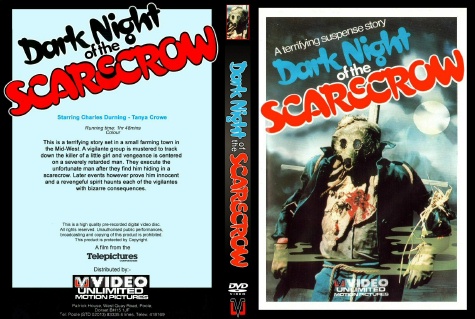