In the 80s I was obsessed with A Nightmare on Elm Street. Because of the popularity of this film an earlier Wes Craven film was re-released on video in the UK. That film was 1977’s The Hills Have Eyes. I first saw the video for this release on a video store’s shelves whilst on holiday visiting relatives. Some of these relatives were born again Christians and so I don’t think renting a film about mutant cannibals would really have gone down that well.

On returning to York and away from The God Squad I rented the film from my local video library. I loved it. 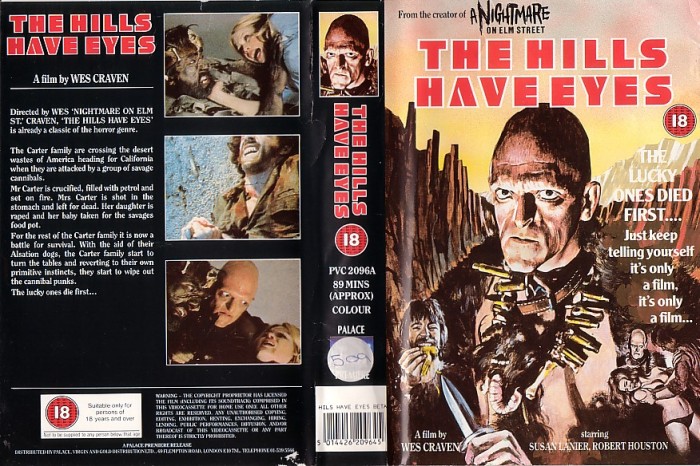 The film was then released shortly after that on retail label Palace Horror and so I bought my own copy of the film which I then watched with shocking regularity. 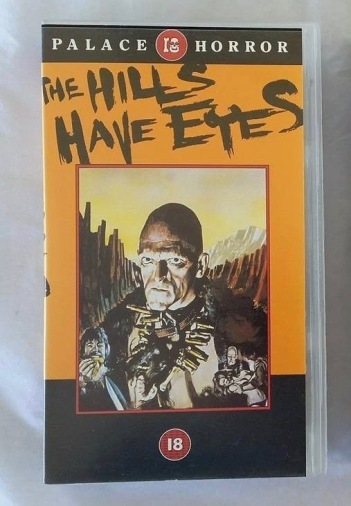 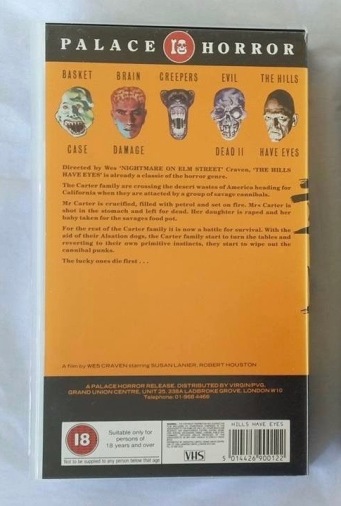 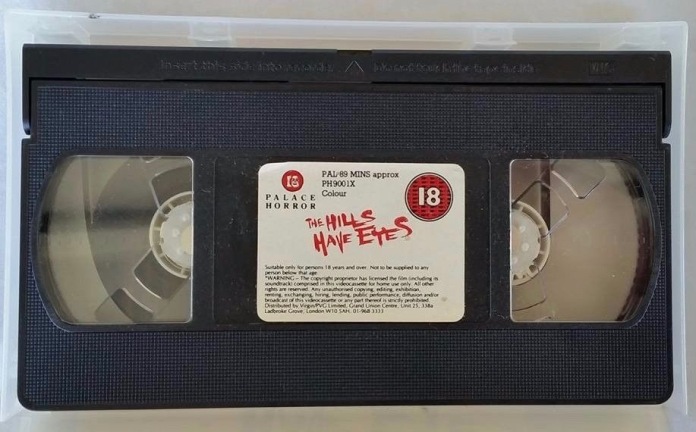 After these releases the film then seemingly sank into semi-obscurity again. I hoped and prayed for a DVD release that was halfway decent.

It was a long wait but this actually happened courtesy of Anchor Bay. I remember seeing the request that had placed on many film industry forums for a negative that they could use as the basis for a release. When that release finally saw the light of day the wait was justified. The print had been restored as had the audio. The DVD was also chockful of extras including an alternate ending that none of the fans of the film knew about.

Whilst watching this film for this review I watched the latest release- Arrow Video’s 4K Blu ray which is the best edition of the film so far. The picture is so sharp that Post-It notes posted on a pinboard in the mobile home can be read and the sign outside the garage in the movie can be made out. Hooray for advancements in film technology. Another Arrow Video triumph. 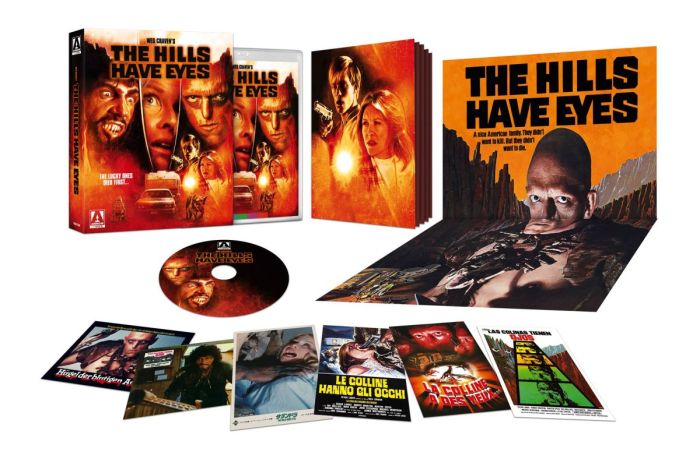 The film itself is about a family who are travelling to California but decide to look for silver mines that are off the beaten track. The family’s car and mobile home attached to it swerve off the road and the family find themselves stranded. Unfortunately they also find themselves under the unwanted gaze of a local group of mutant cannibals who have grown up in the area which is used by the Army to test nuclear capabilities. The film then develops into a battle between the All- American family and the cannibals.

On watching this film again for this review the strongest feeling I got was just how outrageous the film is. It certainly goes the extra mile in terms of plot and grittiness. In fact the film goes even further than director Wes Craven’s previous film Last House on the Left. At one point during Hills a baby is kidnapped by the cannibals for food. If that isn’t pushing the horror envelope then I don’t know what is! But whilst the film and it’s plot may be extreme there is never a sense that the film is ever gratuitous or sensationalistic but still sets precedents. A good point of comparison here is with the godawful remake from 2006. In this original version of the film there is a rape scene that is signified by the eyes of the victim widening. And thats enough for the audience to know whats going on. The same sequence in the remake is much more drawn out, unnecessary and involves the victim getting her face licked by her cannibal attacker. And thats just for starters. Enough said.

Speaking of Last House on the Left, the artistic leap between these two films seems huge. The Hills Have Eyes is positively polished by comparison to Last House in terms of technical ability, acting and direction. However, The Hills Have Eyes still feels gritty, subversive and downright dangerous- like watching a renowned video nasty classic for the first time. Both Last House and Hills use their low budgets feels to their advantage. It seems like Wes Craven believed that a lower budget just means you adapt to this and rise to the challenge creatively without sacrificing quality. Both films have a documentary and realistic feel to them rather than just being examples of exploitation cinema awash with bad acting. 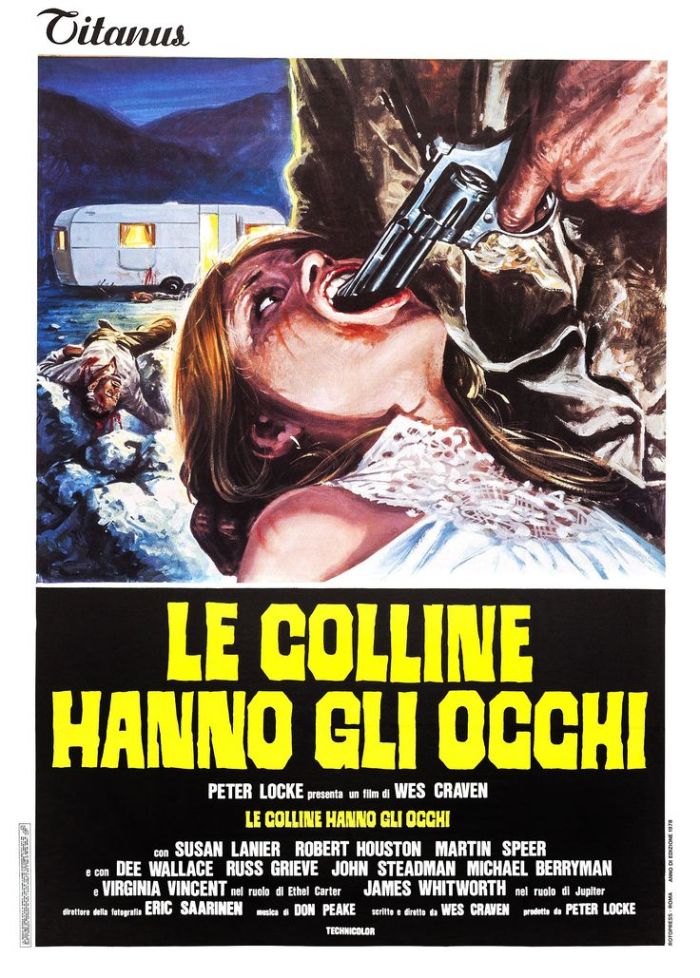 In fact, one of Hills’ many strengths is the acting. As soon as you see the name Dee Wallace on a cast list you know that the film will have a certain level of prestige and integrity. She is amazing as are all of the cast. In fact there are pieces of acting within Hills that seemingly exceed the horror genre. One example of this is when Doug gets back to the mobile home to find that family members have either been raped, shot or killed. And on top of that his baby daughter has been kidnapped. His acting on seeing his dead wife is incredible and extremely poignant.

The movie also made a horror icon of Michael Berryman. Even the poster for the film featuring Mr Berryman’s face was iconic. Imagine seeing that poster outside a cinema in 1977. Even if you didn’t know anything about the film you’d still go and see it as the poster and tagline are so brilliant.

Another example of The Hills Have Eyes as a cult classic is that it is endlessly quotable. It also goes to show that they might be nuclear mutant cannibals but they have some great oneliners. ‘Whats the matter? You don’t like dog anymore?!’

Craven has some very perceptive insights to convey regarding issues such as the family, the relationships within the family, the differences between the two families but also the less obvious similarities between them. I could go into these in much more depth along with my other theories about the film but this will be done soon in a separate article about the movie.

For me, The Hills Have Eyes isn’t just a stunning piece of horror cinema it feels like an innovative and genre-defining film that is just as important as The Exorcist, Halloween or Night of the Living Dead.

The Hills Have Eyes will always be in my Top 10 list of favourite films.