And so, in ascending order…

No. 10- Captain America: The First Avenger

Such a classic American hero gets a classical poster concept.

The Art Deco framing and reimagining for Cap works brilliantly well here as the lines synonymous with this genre also emphasise movement, action and speed.

The red, white and blue of Cap’s costume works really well against the monotone of the background’s gun metal grey. 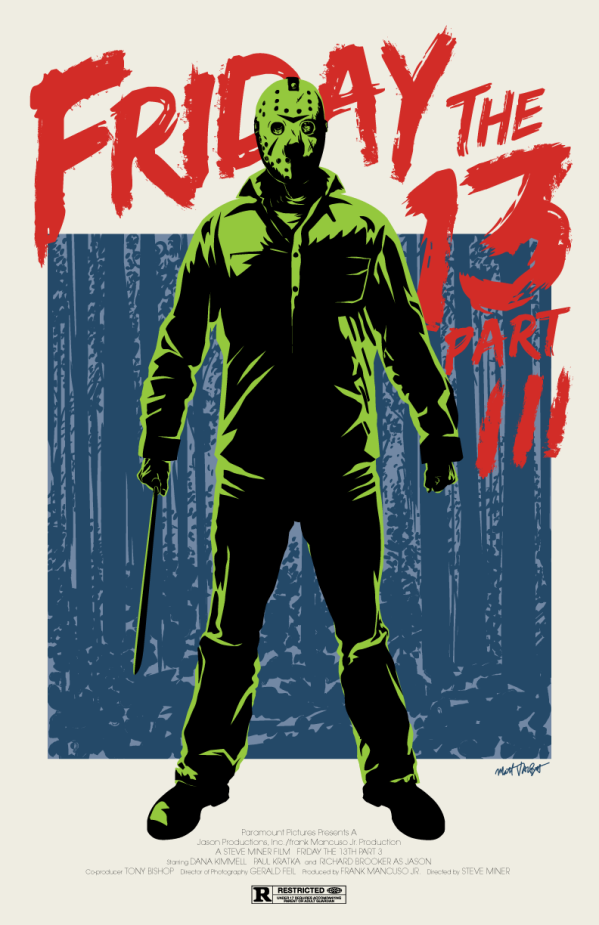 How do you even think about reimagining a horror villain as well known as Jason Voorhees? Like this. Take only single colours (the blue background, the green of Jason, the red lettering that looks it has been written in blood- very Manson Family) and make the image as iconic as possible to reflect the film and central figure.

This is further demonstrated when you realise that it was this Friday instalment that introduced Jason’s hockey mask to proceedings (R.I.P. Shelley). This image further emphasises the iconic dimension to this. 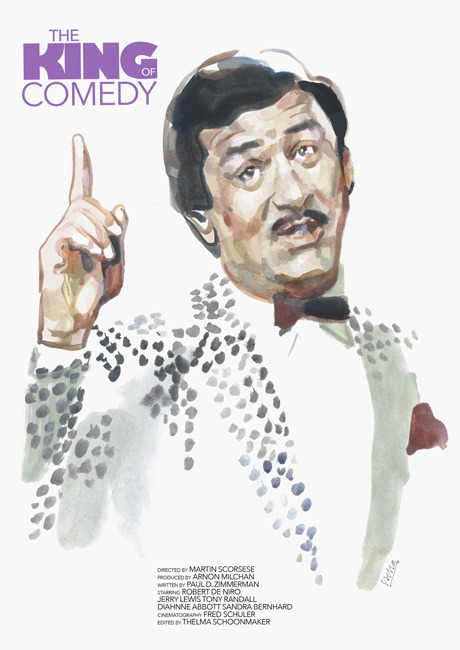 Sometimes simple is best. This poster is minimalism used to brilliant effect. The painting of Pupkin is gorgeous. And that’s all thats needed.

A fan made poster for an inspired double-bill coupled with absolutely gorgeous artwork. The colour of Up, the Gothic darkness of The Birds. The juxtaposition works beautifully.

The typography and aged look to the artwork works amazingly well also. I’d pay to go and see this double-bill anyway, but this poster would make me go and see both of these films even if I hadn’t heard of them.

I’m loving that this artist has used Gosling’s stuntman mask and brought it to the fore for this poster. I’m also loving that he/she has referenced the iconic poster artwork and bald head motif from Dawn of the Dead resplendent with blood splatter.

I noticed the gore/slasher elements of Drive when I first saw it. It appears I wasn’t the only one. Bonus points for the weathered/vintage look to the poster.

A sign of a great fan poster- it fools you into thinking that it was possibly conceived and conceptualised at the time of the film’s release but not used by the studio.

This is what has happened here- the artist has utilised the same style of artwork used at the time, assimilated it and come up with something just as brilliant but completely original.

You can tell that the artist knows this film and the series it belongs within inside out.

There are so much Jaws fan posters on the internet and there are so many that are utterly brilliant.

This entry wins out as it terrifies me. Freud would have a field day with this. The enormity of the shark, the unsuspecting woman who is oblivious to her fate, the black water the shark is lurching up from. The sea could be the psyche, the shark our deepest fears that are waiting to attack and consume us whole. But that would be a Tarkovsky film and not the Spielberg classic we all know and love.

This poster still gives me shivers as I’m looking at it whilst typing this entry.

No.3- A Nightmare on Elm Street Part 2- Freddy’s Revenge 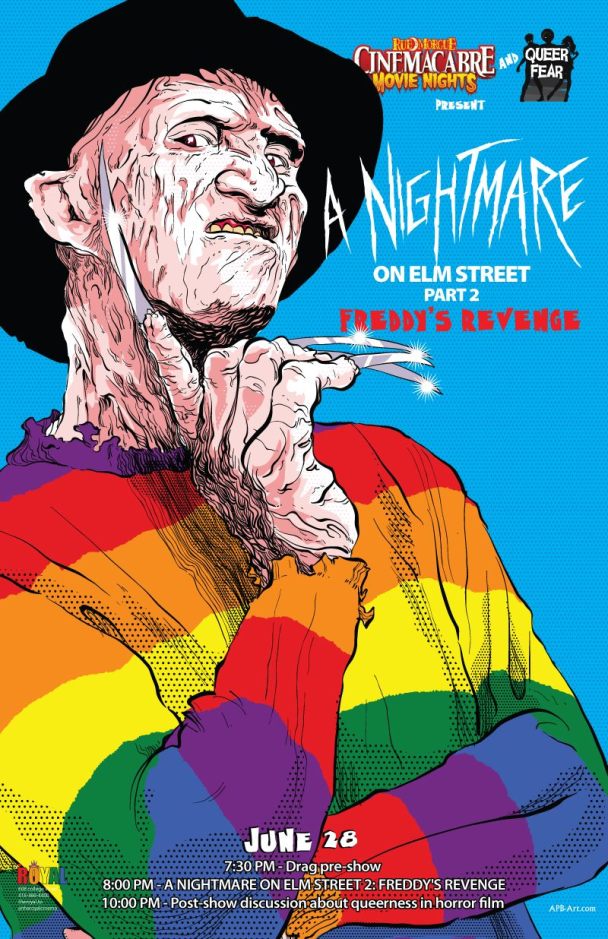 Such a simple premise that no-one else thought to do it! The gay subtext of Freddy’s Revenge is brought to life and placed centre stage on this poster. Thankfully it’s done by someone who is extremely talented and brilliantly gifted.

There was even a ‘Drag pre-show’ before this screening and a discussion about ‘queerness in the horror film’ after it.

This film has become a gay classic as well as newly reappraised by the horror community. It may not have been the sequel to the first that fans wanted but this curve-ball of a film has rightfully now been taken to horrorhound’s black little hearts. 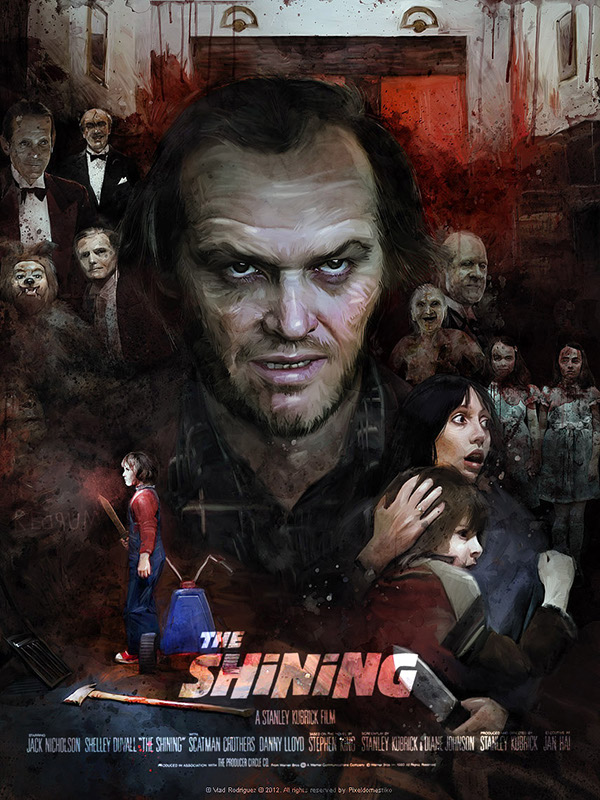 This fan poster is stunning. All the disturbing aspects of the film, all of the disturbing scenarios of the film and the utterly disturbing transformed persona of Jack Torrence are  all upclose and personal on this artwork. And the choice of style for this poster is perfect for this with each brushstroke evoking so much.

When I marvel at this poster I think of the brilliance of artists such as Lucien Freud and Jenny Saville. Really. It’s that good!

No.1- The Texas Chain Saw Massacre

Well, where do I even begin with this beauty?!

My eyes almost popped out of their sockets when I saw this for the first time. Quite possibly, one of the best movie posters (fan-made or official) I’ve ever seen. And loads to discuss.

When I saw this I instantly thought of the Disco-era of the 1970’s whereby a disco dancers moves would be collected together in one picture, the same figure side by side, showcasing the very best of their dancefloor poses.  I then remembered that was in fact a picture like this that was used to publicise Saturday Night Fever with John Travolta as Tony Monero being captured in various poses of disco brilliance.

Theres also a similar collection of poses of Juliet Mills from the horror masterpiece Beyond The Door that was used in the film and as a still. 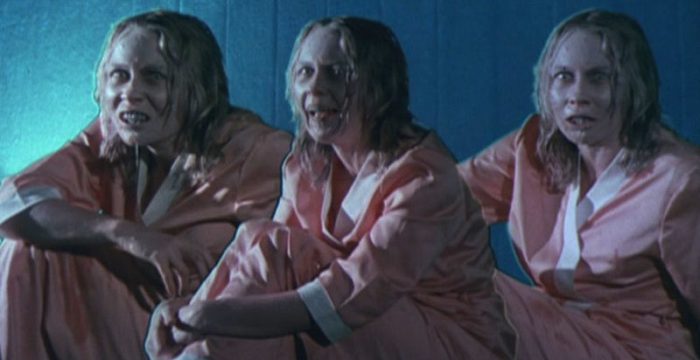 The colours on this TCM poster also compounded this Disco 70’s feel as well as the colours also echo the lit up coloured squares on the dancefloors of the era. This is a culture clash that has something in common- TCM came out at the same time as Disco was starting to take off and just two years before Travolta shook his groove thing and became a household name.

The rainbow colours also act as a signifier of the rainbow flag of the LGBT community. I don’t think Leatherface has ever been recognised as an icon of the trans movement even though he is biologically male but loves to apply make-up…to masks made of his victim’s skin. It’s unconfirmed where Travolta stands when it comes to all things LGBT.