I remember the first time I ever saw any scenes from The Brood was in the excellent documentary, Terror in the Aisles. I then went on to see the film from start to finish in a Film Studies lecture at university. 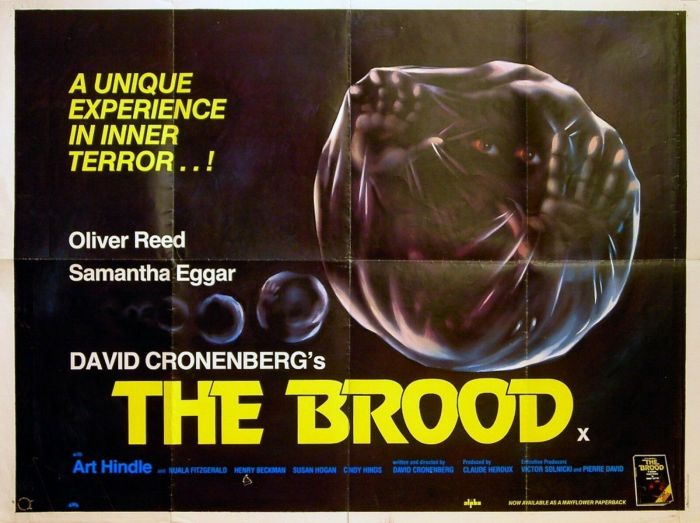 There’s a sinister institution within The Brood that’s called The Somafree Institute of Psychoplasmatics. Guess who the director is. It’s David Cronenberg, of course.

I love Cronenberg’s early films and his riffs on topics that were in the popular consciousness of the time and how he transforms them into body horror. The Brood is his riff on the then-new forms of therapy (The Primal Scream springs to mind) and how it could have disastrous and horrific consequences.

I also love that this was Cronenberg’s own version of Kramer Vs Kramer which he had seen and hated because of its positive view of divorce and child access procedures. The director was going through this hellish process in his own life at the time and his take on it was The Brood. You could say that The Brood is the anti-Kramer Vs Kramer which, of course, is a massive recommendation to me.

The plot could only have come from the fantastic mind of Cronenberg. Oliver Reed plays Hal Raglan, a therapist who practices psychoplasmatics whereby patients with past traumas are encouraged to let go of their suppressed emotions through physiological changes that occur to their bodies. One of his patients is Nola (Samantha Eggar) who is battling for custody with her ex-husband Frank (Art Hindle) for custody of their daughter, Candice. Nola has her own past traumas involving her mother. But then Nola has lots of secrets and revelations to reveal, not just to the other characters in the film but to the film’s viewers also.

I love the fact that an all-star cast which includes Reed, Eggar and Hindle can turn in the kind of distanced, cool and aloof performances under Cronenberg’s direction that are expected in his films. These are the kind of performances that Cronenberg wants and he knows how to elicit these from his actors, whether they’re big names or not.

Samantha Eggar’s performance is deliciously mannered one minute and then completely unhinged the next. The scene in which she lifts up her robes to reveal all (if you’ve seen The Brood, you know what I’m talking about! If you haven’t seen it, you’re missing out…) has kept film writers and analysts writing about it in relation to body horror and femininity since it was filmed. You haven’t lived until you’ve seen Eggar licking a foetus’s head.